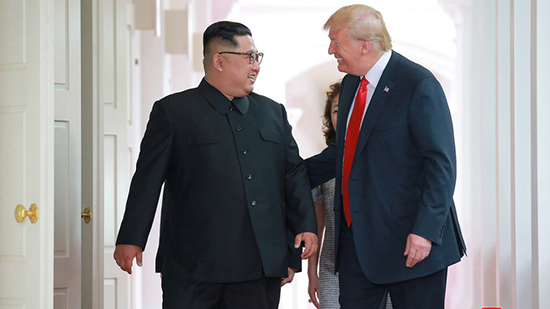 Donald Trump and Kim Jong-un have reportedly exchanged mutual state visit invitations during a historic Singapore summit, where the North Korean leader emphasized the need to halt hostile and irritating actions against each other.

“Kim Jong Un invited Trump to visit Pyongyang at a convenient time and Trump invited Kim Jong Un to visit the US,” the state KCNA news agency said. “The two top leaders gladly accepted each other’s invitation, convinced that it would serve as another important occasion for improved DPRK-US relations.”

Both leaders seemed to be pleased with the outcome of their negotiations in Singapore on Tuesday, which resulted in a four-point declaration aimed at achieving long-lasting peace and the denuclearization of the Korean peninsula. “Got along great with Kim Jong-un who wants to see wonderful things for his country,” Trump tweeted. “As I said earlier today: Anyone can make war, but only the most courageous can make peace!”

North Korea appears to agree with Trump’s assessment, noting that all tensions between the two countries were based on “deep-rooted distrust and hostility.” Now Pyongyang is ready to mend relations with its former rival, after Kim embraced Trump’s “will and enthusiasm” to resolve matters through dialogue and negotiations, and “away from the hostility-woven past.”

Specifically, KCNA stressed that Trump “understood” the agitation of the joint US-South Korea military exercises when the US president expressed his intention to halt the drills and offer security guarantees to the DPRK, in addition to the potential lifting of sanctions.

“Noting that the building of lasting and durable peace-keeping mechanism on the Korean Peninsula is of weighty significance in ensuring peace and security in the region and the rest of the world, [Kim] said that it is urgent to make [a] bold decision on halting irritating and hostile military actions against each other,” the statement reads.

For his part, Kim Jong-un clarified that his country is willing to take additional “goodwill measures,” if the US side takes “genuine” steps for building trust. Both leaders also noted that it is “important to abide by the principle of step-by-step and simultaneous action in achieving peace, stability and denuclearization of the Korean Peninsula,” KCNA reported.