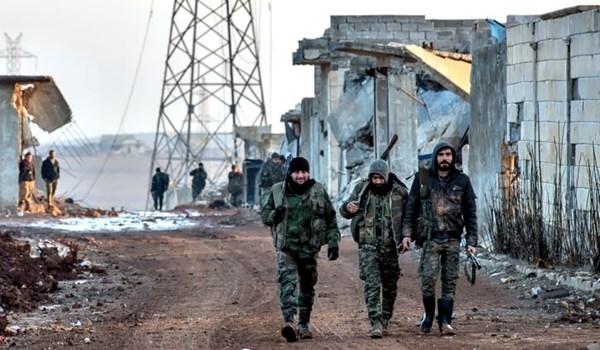 TEHRAN (FNA)- The Syrian Army troops, backed up by the Russian Air Force, managed to preempt ISIL’s heavy attack in al-Tanf region in Southeastern Homs, a media source reported on Tuesday, adding that the terrorists had planned to storm Palmyra (Tadmur) city in Eastern Homs.

The Arabic-language website of RT quoted a source in the Russian Reconciliation Center for Syria as reporting that the army men, backed up by the Russian fighter jets, engaged in fierce clashes with the ISIL that tried to storm Palmyra from al-Tanf region that is under US forces’ control.

RT further said that the army soldiers fended off the attack after killing or wounding a number of terrorists and destroying their military equipment, adding that the remaining pockets of the ISIL retreated toward al-Tanf.

Al-Rukban Camp near the US-run al-Tanf Base has been turned into a base for terrorist groups, including the ISIL.

In the meantime, the Arabic-language al-Watan reported that the army units exchanged heavy fire with ISIL that had attacked the army positions in a region between al-Mo’ayzileh area and T2 Pumping Station and also near Humeimeh region in Eastern Badiyeh (desert) of Homs, and repelled their offensive.

In a similar development on Monday, the army men engaged in fierce clashes with ISIL in Humeimeh region in Eastern Homs.

In the meantime, the artillery and missile units opened heavy fire at ISIL invaders in Humeimeh and T2 Oil Pumping Station.

ISIL suffered heavy casualties and retreated from the battlefield.

Also, the army aircraft pounded the remaining pockets of ISIL in Badiyeh (desert) in Eastern Homs, near al-Ma’eizileh Dam and border region between Deir Ezzur and Homs, killing and wounding a number of militants and destroying their equipment.

Local sources, meantime, reported that the army’s engineering units carried out mop-up operation in Eastern Homs and found a large depot of arms and ammunition of the ISIL in the village of al-Habiyeh with a number of missiles, mortar shells, bombs and landmines.