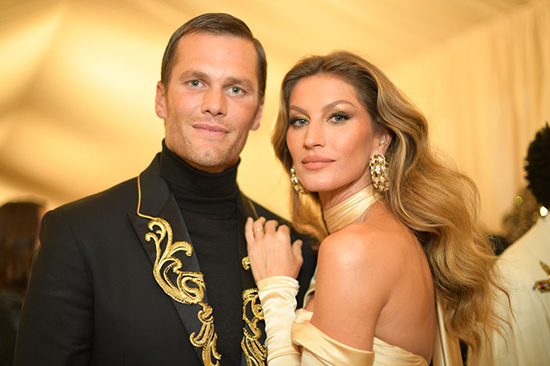 We’ve seen this move before.

Tom Brady pulled out a move from Tom Hiddleston’s love playbook on Tuesday, which also happened to be Valentine’s Day in Brazil, by wearing an “I heart Gisele” T-shirt to show his love for his wife Gisele Bündchen.

“Yes I do! ❤️ Feliz dia dos namorados! Te amo muito!” he captioned the cute photo on Instagram, and it looks like Bündchen approves of the outfit choice.

In 2016, Hiddleston famously made a similar declaration of love during his three-month tryst with Taylor Swift. Perhaps it’s a Tom, thing?

On Fourth of July weekend that year, the Avengers actor was photographed frolicking in a Rhode Island beach wearing an “I heart T.S.” shirt, and the Internet had a field day poking fun at Hiddleston (even Robert Downey Jr. got in on the action).

Some suspected the gesture was a publicity stunt, but after the couple split, Hiddleston told GQ how the wardrobe choice came about in the first place. “We were playing a game and I slipped and hurt my back,” he said. “And I wanted to protect the graze from the sun and said, ‘Does anyone have a T-shirt?’ And one of her friends said, ‘I’ve got this.’”

“We all laughed about it,” Hiddleston continued. “It was a joke … I don’t know. I just, I was surprised. I was just surprised that it got so much attention. The tank top became an emblem of this thing.”