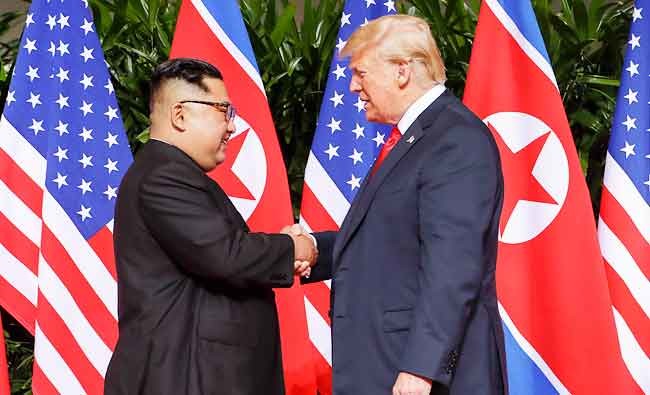 US media has been rife with complaints about the Singapore summit’s achievements. They criticized that North Korean leader Kim Jong-un has won US’ concession without making any new commitment. They also doubted US President Donald Trump’s pledge to end joint military drills with Seoul, saying that it satisfies both Pyongyang and Beijing.

After the meeting with Kim, Trump sent eight tweets to defend the summit’s results. He said that those who were against his earlier military threats toward North Korea and those who are against the Singapore summit are “the same haters.”However, voices that criticize the summit greatly outnumber Trump’s supporters, and have whipped up public opinion.

Trump’s historic summit with Kim was criticized by the US media, because he talked too big. The Trump administration pledged not to make any compromises and requested North Korea to denuclearize immediately, declaring that Washington wouldn’t respond until Pyongyang acts accordingly. Such negotiation tactics are accepted in the corporate world, because the boss decides whether to compromise or not. However, it is much harder for a country’s media to accept policy reversals from Trump.

American media’s debate on US gains and losses after the Kim-Trump summit has strayed from the point. Instead, they should focus on whether the summit helps facilitate the complete denuclearization of North Korea, and does so with minimum cost. However, all they care about is whether Trump made concessions and if North Korea and China benefited as a direct result. If the two Asian countries do benefit, the US media will be upset to the greatest extent.

North Korea-US negotiations will be a long-term process. Those critics think the US should recklessly exert maximum pressure and that’s where US’ advantage lies. The progress of negotiation between North Korea and the US should never be decided by US’ domestic politics. It is a global goal to achieve complete denuclearization on the Korean Peninsula through peaceful negotiation. The process should be as steady as possible, and speed shouldn’t be the only pursuit.

North Korea and China do support if South Korea and the US end their military drills, however, should the US be upset only because Pyongyang and Beijing are happy? Negotiation is about  finding biggest common ground instead of imposing conditions on others through tricks and intimidation.

Tensions on the Korean Peninsula have never been lower. North Korea has suspended its nuclear and missile tests, scrapped its nuclear test site, and repeatedly promised to work for complete denuclearization. Back to the second half of 2017, when there were the most serious tensions and hostilities between the two countries, the US society wouldn’t believe today’s progress possible. How can the US “lose” when there are so many visible achievements?

It’s impossible for North Korea to completely comply with US’ request of denuclearization. However, the Kim-Trump summit eases tension on the peninsula and opens up a new prospect for future negotiation. The peninsula issue needs a good start, but whether the current US media can support Washington in further resolving the issues remains unknown.