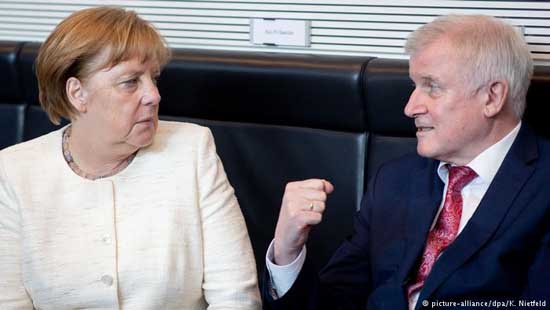 Talks between Chancellor Merkel and Interior Minister Seehofer failed to produce a result before a meeting of state leaders. Seehofer insists on stricter border checks, while Merkel is focused on an EU-wide strategy.

The meeting came ahead of a meeting on Thursday meeting of Merkel and state premiers, where migration policy will again top the agenda. Seehofer’s “migration masterplan,” which was to be presented on Tuesday, has been delayed, reportedly because of opposition from the Chancellery.

The main sticking point between Seehofer, who is from the Bavarian Christian Social Union, and Merkel’s Christian Democratic Union is Seehofer’s demand that border states like Bavaria should be allowed to refuse asylum-seekers trying to enter Germany if they have registered in another EU state or have been refused asylum in Germany already.

Merkel, however, is keen to prevent unilateral steps by Germany that could rile other EU members and further weaken efforts for a migration policy deal for the entire European Union.

According to German news agency DPA, she offered Seehofer and Söder a compromise, suggesting bilateral agreements between those EU countries most affected by incoming migrants and asylum-seekers, such as Italy and Greece.

Seehofer’s CSU and Merkel’s CDU, which are in a coalition government with the Social Democrats, have been struggling to find a common line on migration, with the CSU’s hardline stance at odds with the rest of the government.

Seehofer has, however, found a supporter in conservative Austrian Chancellor Sebastian Kurz, a vocal critic of Merkel’s migration policy since 2015.

Kurz has suggested an“axis of the willing” among Austria, Germany and Italy, ultimately aimed at reducing illegal migration. He called Seehofer a “strong partner” for Austria, putting further pressure on Merkel.

On Wednesday, Seehofer was widely criticized for spurning Germany’s annual integration summitand, instead, sending one of his deputies.