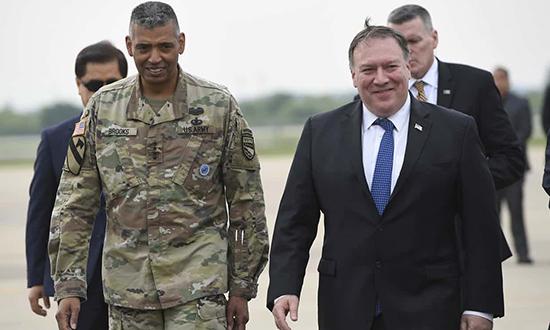 Julian Borger in Singapore and Benjamin Haas in Seoul

Mike Pompeo has said the US and North Korea are close to agreement on a broad range of issues, but has lashed out at reporters when asked about how Pyongyang’s disarmament would be verified.

The US secretary of state was talking to journalists the day after a joint statement signed by Donald Trump and Kim Jong-un in Singapore, on North Korean disarmament and bilateral relations.

The statement has been criticised by arms control experts because it used the vague language favored by the regime rather than the more precise definition of disarmament the Trump administration had said it would insist on before the summit.

When pressed on whether Trump and Kim had discussed verification, which would involve the deployment of weapons inspectors to North Korea, the secretary of state lost his temper. “I find that question insulting and ridiculous and, frankly, ludicrous,” the former Republican congressman said. “I just have to be honest with you. It’s a game and one ought not play games with serious matters like this.”

Most observers agree that the Singapore meeting went some way towards defusing tensions on the Korean peninsula, but had not made clear whether the Pyongyang regime was serious about giving up its nuclear weapons.

Pompeo spoke after arriving in Seoul to brief the South Korean and Japanese governments on the summit’s outcome. He said the joint statement did not contain all that had been agreed in principle with Pyongyang.

He added that there would be more bilateral talks soon, and expressed hope that “major disarmament” would be achieved in the next two-and-a-half years, before the end of Trump’s first term.

At a later joint media conference with Japanese and South Korean counterparts, Pompeo said: “Kim Jong-un understands the urgency of denuclearisation and that we must do this quickly.”

Pompeo also backed Trump’s claim on Twitter that “there is no longer a nuclear threat from North Korea”, despite Kim maintaining his nuclear arsenal and a range of ballistic missiles.

Pompeo’s outburst came when he highlighted that US and North Korean officials meeting in the demilitarised zone (DMZ) had made a lot of progress in the run-up to the summit that would soon become public.

“Not all of that work appeared in the final document, but [there were] lots of other places where there were understandings reached,” Pompeo said. “We couldn’t reduce them to writing, so that means there’s still some work to do, but there was a great deal of work done that is beyond what was seen in the final document.”

In the joint statement, Kim agreed his country would work towards “complete denuclearisation of the Korean peninsula”.

It is a stock phrase the regime has used since 1992, but which it defines loosely as a distant aspirational goal that would take place in the context of global disarmament by nuclear weapons powers.

Before the Singapore summit, the Trump administration, and Pompeo in particular, insisted the US would demand more rigorous terms, specifically “complete, verifiable, irreversible disarmament” (CVID), which is favoured by arms control experts to reduce wiggle-room in negotiations.

Before the Singapore meeting, Pompeo repeated the phrase almost daily in interviews and speeches, and in a tweet on the eve of the summit.

But when he was asked why the words “verifiable” and “irreversible” were not in the joint statement, he argued the two terms were encompassed in the single word “complete”: “You could argue semantics, but let me assure you that it’s in the document,” Pompeo said.

When asked again how disarmament would be verified, Pompeo replied: “There’s a long way to go, there’s much to think about, but don’t say silly things.

“It’s unhelpful for your readers, your listeners, for the world,” Pompeo said. “It doesn’t remotely reflect the American position or the understandings that the North Koreans have either.”

On returning to the US from his historic meeting with Kim, the first ever between US and North Korean leaders, Trump declared in a tweet: “There is no longer a nuclear threat from North Korea.”

The president blamed the media for scepticism over what had been achieved in Singapore. “They are fighting hard to downplay the deal with North Korea. 500 days ago they would have “begged” for this deal – looked like war would break out,” Trump said. “Our country’s biggest enemy is the fake news so easily promulgated by fools!”

North Korean media declared the summit a victory for Kim, and highlighted Trump’s announcement after the meeting that the US would suspend joint military exercises with South Korea, news which appeared to take Seoul by surprise.

According to Trump, Kim pledged to dismantle a missile engine testing site, but that has so far not been mentioned by Pyongyang.

Arms control specialists warned that the vagueness in the language in Singapore suggested that the summit had done little to close the gap between the two sides in their approach to disarmament.

“Headed into the summit, the US and North Korea failed to reconcile their definitions of denuclearisation, and this failure paradoxically allowed them to talk,” Mira Rapp-Hooper, a senior fellow at Yale Law School’s China centre, said. “By eliding these distinct definitions in the joint statement in ‘complete denuclearization of the Korean peninsula’, they have once again failed to commit to the same objective.”

Kelsey Davenport, the director for non-proliferation policy at the Arms Control Association, said: “Pompeo is assuming that North Korea shares his interpretation that ‘complete denuclearisation of the Korean peninsula’ implies ‘verifiable’.”

“That is a dangerous assumption because North Korea has exploited ambiguity in the past to derail agreements,” Davenport said.

Joseph Cirincione, the head of advocacy group the Ploughshares Fund, said that there had been plenty of arms control agreements before the George W Bush administration coined CVID.

“Pompeo is right that ‘complete denuclearisation’ implies and could include those concepts. But Pompeo personally and the administration overall made such a big deal about it before the summit that its absence is striking,” Cirincione said.