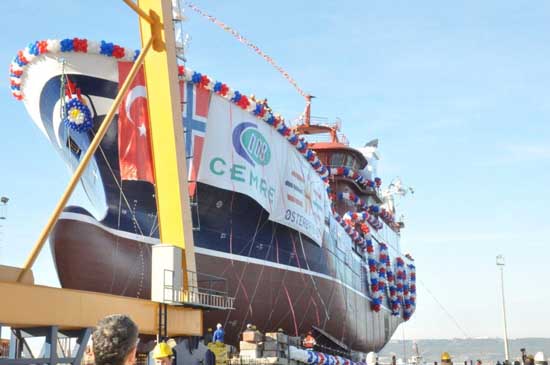 A shipyard located in Turkey’s Marmara region has built its 47th ship for the Norwegian company Havyard Group, the head of the shipyard said on June 12.

The 47th ship, battery-powered, 115 meters long and a with a 180-car capacity ferryboat, is named Fyord1, Cemre Shipyard chair Orhan Gülcek said at the launching ceremony in the northwestern province of Yalova.

“We broke a record in Turkey by producing the most ships for a single company,” said Gülcek.

The ship is the Norwegian company’s first ferryboat design, he added.

Cemre Shipyard, established in 1996, builds ships at its 70,000-meter-square plant in Yalova.

Turkey’s ship and yacht sector’s exports were $354.4 million in the first five months of the year and $1.33 billion in 2017, according to Turkish Exporters’ Assembly (TİM) data.