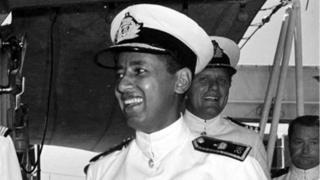 When Eritrea gained independence in 1993, Ethiopia suddenly found itself without a coastline and so it took the logical step of disbanding its navy. Now, it is reconsidering its decision and its latest manoeuvres in the region suggests it could be shopping around its neighbourhood to find a naval base it can use.

Prime Minister Abiy Ahmed recently said on state TV: “We built one of the strongest ground and air force in Africa… we should build our naval force capacity in the future.”

His comments revealed the country’s naval ambitions but his plans for how to achieve this goal have not been made public. However, Ethiopia’s latest push to enter into deals with its coastal neighbours signal something is afoot.

What is behind the move?

After Ethiopia and Eritrea fought a bitter border war from 1998-2000, there was little chance that Ethiopia could carry on using Eritrea’s ports as it had done previously. So it had to find alternatives.

Ethiopia recently signed a deal to take a stake in the port of Djibouti, which now handles roughly 95% of all its exports and imports.

It is also connected to its small neighbour by a new 472 mile (759 km) railway line – opened last year – which links the capital Addis Ababa to the port of Doraleh, an extension of the port of Djibouti.

The railway line has increased the movement of cargo volumes to and from the port to such an extent that at least 70% of all its activity is now Ethiopian trade.

Roba Megerssa Akawak, head of the state-owned Ethiopian Shipping & Logistics Services Enterprise (ESLSE), told Bloomberg that Ethiopia was concerned that Djibouti was controlled by foreign naval forces. US, China, Japan and France all have military bases there.

“We are afraid perhaps in the future that even Djibouti may not have its own say to really decide on its own fate. This is quite a threat to Ethiopia,” Mr Roba said.

He added that a navy would also help protect the 11 Ethiopia commercial ships in a “very volatile” Red Sea area where Ethiopia has other economic interests “and there are conflicting political interests”.

These ships are currently based in Djibouti, from where they sail to ports in the Gulf, the Indian sub-continent, China, Korea, Japan, Singapore, South Africa, and Indonesia.

Ethiopia also still has a civilian maritime institute which trains more than 500 marine engineers and electro-technical officers each year, with plans to train more than 1,000 officers annually.

According to the Ethiopian Maritime Institute the graduates have skills and knowledge “needed to succeed in the global shipping industry”.

Building a navy from the ground up is however a different kettle of fish – it would require massive financial investments and a lot of time to train the forces, as well as a base.

Since coming to power in April, Mr Abiy has also signed deals with Sudan for access to Port Sudan, in a bid to diversify its port outlets and reduce port fees.

Ethiopia has also agreed a deal with the self-declared Somali state of Somaliland for a 19% stake in the port of Berbera which includes a plan to build a road from its border to the port.

Mr Abiy also struck a reconciliation tone in his maiden speech – calling on long-time foe Eritrea to resolve their differences, saying the two countries were “not only intertwined in interests but also in blood”.

He has since followed up on his reconciliation offer by agreeing to a 2002 border commission resolution which awarded disputed territories, including the town of Badme, to Eritrea. This was one of the war’s main flashpoints.

Eritrea has not commented on the move.

Its information minister Yemane Gebre Meskel had previously told the BBC that relations could not be resolved until Ethiopia withdrew “from the occupied territories”.

However, the relationship with Eritrea is unlikely to thaw to the extent that Ethiopia could once more rely on the port of Asmara. There is also a danger that Ethiopia’s naval ambitions could alarm Eritrea.

“Ethiopia’s right to use international waters demands it has a naval base,” he told the BBC’s Newsday programme.

He suggested Kenya, Somaliland and Djibouti as possible locations for the base.

The plan, Mr Birhanemeskel said, was to push for the “unification of the Horn of Africa as an economic bloc and the navy is part of that project”.

He said Ethiopia would use its strong cultural and economic ties in the region to push for its naval ambitions.

In May, Ethiopia agreed a deal with Kenya to facilitate the acquisition of land in the island of Lamu as part of the Lamu Port-South Sudan-Ethiopia-Transport (Lapsset) project, a $24bn (£18bn) transport and infrastructure plan to link the two countries and their neighbours.

The project was signed in 2012 but has been beset by funding delays and security problems in both countries.

In Ethiopia, the government was until recently dealing with large anti-government protests which culminated in the resignation of Mr Abiy’s predecessor Hailemariam Desalegn in February.

Mr Abiy has struck a different tone since taking office, calling for reconciliation in Ethiopia. He has pushed for reforms including the release of political prisoners and activists.

His government has also ended a state of emergency.

Deo Gumba, from the Institute for Security Studies (ISS), says Ethiopia’s naval ambitions could be targeting the operations of Islamist militant group al-Shabab in Somalia, as well as piracy in the Indian Ocean.

Mr Gumba said that, as a US ally, Ethiopia was likely to get support for its plans.

Is a navy feasible?

Timothy Walker, a maritime researcher at ISS, however cautioned that it would take decades for Ethiopia to have a fully fledged naval unit.

“It may create a maritime branch of its armed forces but not a navy… it would take decades for the procurement of ships and training of the force.”

“Many African countries do not have a sufficient navy and if you look at the Horn of Africa, the big world powers are the ones who operate there,” Mr Walker said.

“Recorded incidents of piracy and militancy in the region do not justify investment in building a navy from the ground up.”

But despite the naysayers, Ethiopia seems determined to press on with its plans.