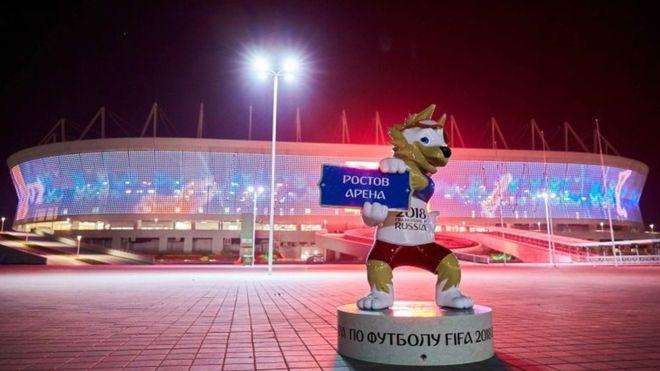 The 2018 Fifa World Cup gets under way on Thursday when hosts Russia face Saudi Arabia following an opening ceremony at Moscow’s Luzhniki Stadium.

England, winners in 1966, are the only team from the home nations to qualify and start against Tunisia on 18 June.

Germany, who defeated Argentina in the 2014 final, are looking to become the first team to win back-to-back World Cups since 1962, while Brazil seek a record-extending sixth world title.

The month-long tournament is expected to attract one and a half million fans to Russia and an estimated global television audience of over three billion viewers.

There are eight groups, each containing four teams, with the top two advancing to the last 16. The final takes place at the 81,000-capacity Luzhniki Stadium on 15 July (16:00 BST).

Who will win the World Cup?

Hosts Russia are also seeded, even though they are the tournament’s lowest-placed team – 70th – in Fifa’s world rankings.

England, who have won only one of their past eight World Cup matches, are unseeded, as are 2010 champions Spain.

Germany have reached at least the semi-finals in each of the past four editions of the competition and, after being the only team to progress through European qualifying with a 100% record, are expected to be in the shake-up again. They are in Group F with Mexico, Sweden and South Korea.

“Germany will be hunted like never before,” said head coach Joachim Low. “Only us, as world champions, have anything to lose.”

Brazil are the only nation to have appeared at every single World Cup but they have not won the tournament since 2002, while you have to go back to 1958 to the last time they won it on European soil.

Yet the Brazilians will fancy their chances, particularly as Neymar, who cost a world record £200m when he moved from Barcelona to Paris St-Germain in August 2017, has returned to action after a broken foot.

Relive all the goals from World Cup 2014

Spain feature several Champions League winners from Real Madrid in their squad as they look to recapture the magic that saw them crowned world champions eight years ago and European champions in 2008 and 2012.

Meanwhile, Cristiano Ronaldo will be hoping for a first World Cup winners’ medal after helping Portugal win Euro 2016, while Lionel Messi is hoping to win a first major trophy with Argentina.

How are England expected to perform?

England looking forward to getting on with it – Southgate

The closest England have come to repeating their feat of 1966 is a semi-final appearance at Italia 90.

With an average age of 26 years and 18 days, the Three Lions have the third-youngest squad in Russia.

Only three of Gareth Southgate’s 23 players are aged 30 or over – defenders Gary Cahill and Ashley Young, both 32, and 31-year-old forward Jamie Vardy – while defender Trent Alexander-Arnold is the youngest at 19.

Cahill, Jordan Henderson, Raheem Sterling, Danny Welbeck and Phil Jones are the only survivors from the squad that finished bottom of their group at the 2014 World Cup under Roy Hodgson.

While England comfortably qualified for Russia – and enjoyed friendly victories over Nigeria and Costa Rica in recent weeks – former Three Lions captain Alan Shearer does not believe they will win the tournament.

“It’s impossible not to dream about lifting the World Cup. I believe we can win it – anyone can,” said the Tottenham forward.

One thing England will have to address if they want to go far is their poor record at the knockout stage in major competitions.

They have not won a knockout match at a tournament since defeating Ecuador in the last 16 of the 2006 World Cup.

“Yes, we have a great record when it comes to qualifying, but since the 2010 World Cup our record at finals has been poor,” added Shearer, who played alongside Southgate at the 1998 World Cup.

“That’s why we should concentrate on getting out of our group first before we worry too much about who we could face in the next round, because doing that has been difficult enough in the past.”

Who are the new boys?

Panama and Iceland will be competing at their first World Cup, which is held every four years.

With a population of approximately 335,000 people, Iceland are the smallest nation ever to qualify.

They will hope to repeat their exploits of two years ago, when they lit up Euro 2016 by reaching the quarter-finals in their first appearance at a major tournament, humiliating England en route.

Iceland’s first game in Russia is against 2014 runners-up Argentina on 16 June.

A national holiday was declared in Panama after they qualified for the World Cup for the first time.

The Central American country, 55th in Fifa’s world rankings, boast an experienced coach in Hernan Dario Gomez, who was in charge of his native Colombia at the 1998 World Cup and Ecuador at the 2002 edition.

The streets of Panama City were filled with people celebrating

There are several teams back on the world stage after lengthy absences.

However, there are some notable absentees.

The Netherlands, runners-up in 2010, also missed out while the United States are absent for the first time since 1986.

Referees to get VAR help

Video assistant referees (VAR) will be making a debut at the World Cup.

The technology will be used to help officials avoid making potentially match-deciding mistakes when it comes to such important issues as awarding goals, penalties or red cards.

VAR has been trialled in some domestic English cup games this season, and has been used in Germany and Italy.

“We wanted to give the referees tools so they can make better decisions, and in the World Cup some very important decisions are made,” said Fifa president Gianni Infantino.

“It’s not possible that in 2018 everyone in their living room knows a few seconds after the play whether a referee has made a mistake and the referee doesn’t.”

VAR was first used at the Club World Cup in December 2016, and trialled in the 2017 Confederations Cup.

Russia is hoping to put on a tournament to remember after beating England – as well as joint bids by Spain and Portugal, and the Netherlands and Belgium – to stage the tournament for the first time.

While about 10,000 England fans are expected to travel to Russia, a number are likely to stay away because of political tensions between the two countries and safety issues.

There were violent clashes when Russian fans charged England supporters in the stadium when the two countries played each other in Marseille at Euro 2016. Trouble was also reported in the city’s streets between England, Russia and France fans.

“One thing supporters need to do when they go is be a good guest, behave themselves,” said Mark Roberts, Britain’s lead officer for football policing.=

Deputy Chief Constable Roberts warned acts of disorder will carry “severe” sentences in Russia although Alexei Smertin, the anti-discrimination chief of Russia 2018, played down concerns and said the atmosphere around World Cup venues will be friendly.

“It definitely won’t be stressful and we let everyone feel comfortable and safe in our country,” said the former Chelsea midfielder, capped 55 times by Russia.

How to follow the World Cup on the BBC

The BBC is the only destination for coverage 24 hours a day, seven days a week, on television, radio and online.

We will have 33 matches televised live while BBC Radio 5 live will provide live commentary of all the games.

England’s first two World Cup matches will be shown exclusively live on the BBC, starting with the game against Tunisia on Monday, 18 June, and then the match versus Panama on Sunday, 24 June.

Meanwhile, fans will be able to watch the tournament in Ultra HD and virtual reality as BBC Sport trials cutting-edge technology.

Users will be transported to a fully immersive stadium experience, through headsets, as if they are sitting in their own hospitality box.

All 33 matches broadcast by the BBC will be available for free on BBC Sport’s VR 2018 World Cup app, and the 29 matches on BBC One will also be available in Ultra HD.

Ultra HD TV can be accessed through a high-speed internet connection and will be available on a first-come, first-served basis.

The HD stream will be available from the BBC iPlayer home screen as soon as programme coverage begins but the number of users granted access will be limited to “tens of thousands of people”.