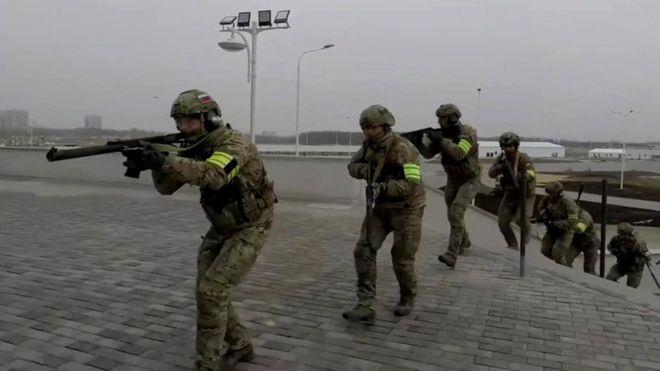 At a surveillance centre in Kaliningrad, monitoring teams are keeping a close eye on the city.

Sitting at their computers, staff are studying CCTV images from more than 700 security cameras. Another 1,200 cameras have been installed at Kaliningrad Stadium, where England play Belgium on 28 June.

With the latest face-recognition technology, individuals are checked automatically in a police database within seconds of being caught on camera. Similar security systems are in operation in the other World Cup host cities.

“In terms of anti-terrorism, this system will help locate suspicious individuals,” says Sergei Evstigneev from the Kaliningrad regional government. “It will allow the police to monitor their movements and react to any situation.”

But security cameras are just the first line of defence.

In Kaliningrad, local security forces have been training to react to a possible terrorist attack during the World Cup.

In one exercise, elite units – the “Spetsnaz” – parachuted into the football stadium to deal with a hostage scenario.

In a dramatic training video released by Russia’s internal security service, the FSB, special forces armed with Kalashnikovs are shown battling to secure the venue.

More on the World Cup

Russia knows that its military operation in Syria makes it a target for terrorists.

In recent weeks, those sympathetic to the Islamic State group have issued threats via the internet against the World Cup.

This may be scaremongering, but the Russian authorities are taking no chances. They have deployed the army, the navy and the air force to boost security.

The FSB claims to have uncovered terror cells in several World Cup host cities, including Kaliningrad and St Petersburg. It has made a string of arrests.

“The Russian FSB does not really care much about human rights,” believes security analyst Pavel Felgenhauer.

“They’re taking out of circulation everyone they believe is a potential threat, no matter what. They put them in custody, maybe in prison; people who may be innocent, but they apparently believe that it’s better to take 10 innocent guys off the street than let one terrorist have a run.”

The security challenge is considerable: to protect not only stadiums, training grounds and fan zones, but all crowded public areas, from shopping centres to squares and public transport.

“It is very hard to prevent a knife attack somewhere in the street,” explains Mr Felgenhauer, “or to stop someone stealing a car and slamming into pedestrians. There are also vulnerable points in big cities like Moscow and St Petersburg. The Metro networks there have been attacked before.”

Russia knows that there is no such thing as “100% security”. But officials are confident the tournament will pass off safely.

“Believe me, the security measures we are taking are unprecedented,” World Cup security chief Alexei Lavrishchev assures me.

“They are based on our own experience of providing security for such events, plus international experience. There are sufficient measures in place to ensure that football fans, tourists and Russian citizens will feel comfortable and safe.”