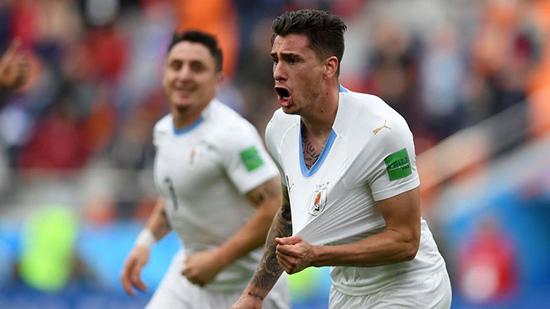 A last-minute header from Jose Gimenez gave Uruguay a dramatic 1-0 win against a stubborn Egypt side in their tough Group A clash.

Despite playing the full game without Mohamed Salah, Egypt more than held their own and produced a disciplined, well organised display to nulify most of their opponents’ attacking options.

Luis Suarez had a difficult game with a number of missed chances, while Edinson Cavani had a couple of opportunities saved and also hit the post late on with a well-struck direct free kick.

Soon after, with the 90 minutes almost up, centre half Gimenez rose magnificently from a corner to power his bullet header into the corner of the net.

The goal really got Uruguay out of jail as they’d been slow and sluggish at times as they struggled to break down a hard-working Egyptian side.

The result saw Uruguay move to 4/7 favourites to win Group A, while Egypt are out to 100/30 to qualify. Russia face Egypt next up on Tuesday with Uruguay taking on Saudi Arabia on Wednesday.