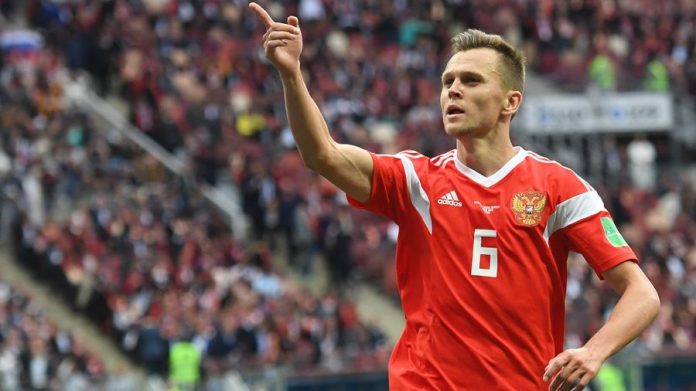 Denis Cheryshev’s fine double helped Russia to a comfortable 5-0 victory over Saudi Arabia in the opening game of the 2018 World Cup.

Yury Gazinsky, Artem Dzyuba and Aleksandr Golovin also contributed goals, but it will be former Real Madrid man Cheryshev who steals the limelight on a famous night for the Russians.

The hosts, now 1/3 with Sky Bet to qualify for the knockout stages, got off to a near-perfect start to the tournament, with a first-half muscular injury to Alan Dzagoev their only cause for concern from the match.

After an opening ceremony which included British pop icon Robbie Williams, it took just 12 minutes for the tournament’s first goal, with Gazinsky opening his international account with a well-taken header across goal.

Substitute Cheryshev, Dzagoev’s replacement, doubled their lead with a fine finish to complete a good attacking move. Villarreal winger Cheryshev took the ball on inside the box, taking two sliding Saudi Arabia players out of the game with his first touch before getting the ball out of his feet and firing high into the net.

After a slow start to the second half, substitute Dzyuba netted with his first touch on 71 minutes, an impressive header from close range.

Cheryshev got his second late on, with a sublime outside-of-the-boot finish before Golovin added a fifth deep into stoppage time with a 20-yard curling free-kick.

Some of the defending and organisation on display from Saudi Arabia will leave the likes of Edinson Cavani, Luis Suarez (both Uruguay forwards) and Mo Salah (Egypt) looking forward to facing them in Group A.