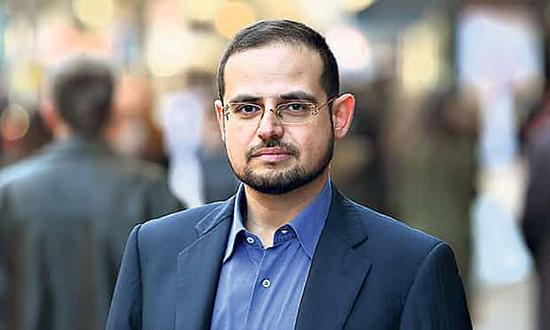 Aimen Dean said he discovered that Hamayun Tariq, a Briton, was planning to bomb flights to US

A former MI6 spy has revealed how the actions of a West Midlands man who became a master bomb-maker for Isis led to America’s laptop ban on flights.

Aimen Dean made the revelation in his autobiography, explaining how Hamayun Tariq, from Dudley, had plans to smuggle bombs “disguised as laptop batteries”.

This prompted a ban on passengers carrying laptops on flights from 10 airports in the Middle East and North Africa bound for the US.

Tariq, a car mechanic who became a jihadist and boasted about his bomb-making skills on Twitter, is believed to have helped create bombs that could be disguised as laptop batteries and taken on planes. Dean says Tariq is now adapting drones to strike football stadiums and other crowded venues.

The Isis bomb-maker Hamayun Tariq, who is somewhere on the Syria-Iraq border. Photograph: social media

The disclosures from Dean, a former al-Qaida explosives expert recruited by secret services to infiltrate UK jihadist circles, were made in his new book, Nine Lives.

Dean first met Tariq, who once went by the nom de guerre Abu Muslim al-Britani, while working as an undercover agent.

In the book, written with Paul Cruickshank and Tim Lister, Dean writes: “An intelligence source told me in 2017 that Abu Muslim was involved in Isis efforts to develop bombs that could be smuggled onto aircraft disguised as laptop batteries.”

The discovery is believed to have caused the US to ban some airlines from the Middle East from allowing passengers to take laptops onto flights as carry-on luggage.

The ban, which also covered electronic tablets and e-readers, was initiated in March last year but lifted four months later after improved security checks had been put in place.

Dean told the Sunday Times in May that Tariq, a divorced father of two who was born and brought up in Dudley, is now on the Syria-Iraq border where he is developing drones laden with explosives with the potential to attack sports arenas.

Tariq served three-and-a-half years in prison for conspiring to defraud banks and post offices. He then left the UK in July 2012 to fight for Islamic insurgents in Waziristan in the tribal belt of north-west Pakistan. After leaving the UK he resurfaced on Twitter to share chilling images of a new high-tech bomb-making laboratory he assembled there.

The self-declared bomb-maker used the social media platform to distribute information from the Mujahideen Explosives Handbook. He tweeted pictures of multiple pages of handwritten notes on electronic components that could be used to assemble bombs, along with basic information on the chemicals needed to make crude toxins and poisons.

In an interview with the Guardian in November 2014 via direct message on Twitter, Tariq said his transition towards a more fundamentalist mindset began in 2000. “It was after … I started reflecting on the creation of God that I came to understand there was a creator who gives life and takes life,” he said.

He skipped bail and fled to Pakistan to avoid being tried for fraud in Wolverhamton crown court in April 2005 but said that he was deported back to the UK in October 2007 and subsequently served his sentence for three and a half years.

Following his release, he said, he went to the tribal regions of Pakistan “to evict the infidels from our occupied lands and to implement the laws of the almighty God”. While there he said his co-jihadist members were killed in US drone strikes.

Asked about his role in Isis he said that he was working in explosives and also trained as a sniper.