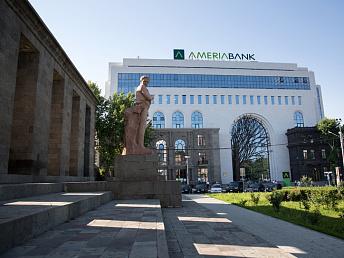 YEREVAN,/ARKA/. A new business center in downtown Yerevan “Kamar” (Arch), built on a site that used to house the Tiflis commercial bank, founded about a century ago and the Armenian Agricultural Bank, started functioning in Armenia’s capital city. It combines the architectural features of the old Yerevan and modernist approaches and solutions.

The director of the business center Artashes Kazakhetsyan speaks about the concept of the building, its “green” solutions and the unique historical finds, made during the construction, handled by Prodeco (Property Development Company), which is part of America group of companies.

Kazakhetsyan says when making investments, Ameria is guided by the principle of not only pursuing profit making, but also trying to introduce innovation elements and be one step ahead of everyone. According to him, the construction of the business center cost $25 million. The money was raised through private investments. He says Prodeco attracted funds not as investment in a real estate property, but as an attempt to build a structure with state-of-the-art architectural solutions, including energy-saving “green technologies.”

He says the business center embodies the desire to harmoniously juxtapose the ancient Armenian and Yerevan architectural traditions with modern innovative solutions using glass and metal. In his words, the main goal was the preservation of the “old Yerevan corner” and the elements of antiquity. This required considerable time and resources, including digitizing the old building and its subsequent restoration.

The business center is based on two facades of old buildings, which were built on this site at the beginning of the last century. To get the full effect of how the new building is perceived , one should look it from the side. The building of the Tiflis commercial bank, built in 1910, was erected on the right side. It was designed by a Tiflis–based Armenian architect Mikael Ohanjanyan. Throughout its century-old history, this building used to house financial institutions and banks. Today it houses a branch of Ameriabank, preserving its traditions of financial profile. To the left of the entrance there is a building of the Agricultural Bank made of gray basalt, built by architect Nikolai Buniatyan under the supervision of Alexander Tamanyan in 1927.

According to the idea of the authors of the project – architect Ruben Hasratyan and sculptor David of Yerevan, in the central part, a little away from their historical predecessors there is the building of the business center, which, as a majestic arch at the entrance, connects history and modernity by a kind of bridge. In the center of the arch there is a “tree of life”, one of the traditional Armenian symbols of longevity and prosperity. The elements of the old building, made of black tuff are also used in the interior of the business center, creating a general atmosphere of the preserved historical heritage.

Before starting functioning, the business center has registered records. It is the first building in Armenia to receive certification from the prestigious British company BREEM, which deals with research and certification of buildings for compliance with “green” technologies.

The second record is the “green” wall – the highest in Europe “living” wall of greenery, which frames the entrance to the building from two sides and ends with small waterfalls. The height of horizontal green space is 20 meters, and its total area is 160 sq.m. According to the authors of the project, this greenery creates a normal microclimate in the vestibule, moistening the air and enriching it with oxygen. In addition, it softens the atmosphere of white marble and glass.

To build the building in accordance with old traditions and architectural solutions, many archival documents were researched both in Yerevan and Tbilisi, Georgia. Over the three years of construction, the architects and developers reviewed numerous documents, photographs and made unique finds, which are housed in a special museum, which features 100-year-old photographs showing the Shahumyan Square, where the building is, and displaying historical facts about the Tiflis commercial bank, as well as documents on the decision to establish it. Also among the exhibits one can see century-old bonds that were found under the foundation of the building, and the seal of the Tiflis commercial bank.

When analyzing archival documents, a unique find was discovered – it turned out that the architect of the “black building” of the bank is not Boris Mehrabyan, as was commonly believed, but Mikael Ohanjanyan. In the museum one can also get acquainted with the history of the buildings, find out which companies were located in these buildings in different years.

Kazakhetsyan notes that despite the fact that the business center was opened not so long ago, almost all rooms have already been rented . The 9-floor building has a parking for 100 cars. The main part of the business center is occupied by Ameriabank. There are also the offices of the Zangezour Copper and Molybdenum Combine, Rosgosstrakh insurance company, a Philip Morris branch, as well as the British Embassy in Armenia and the office of the Asian Development Bank.