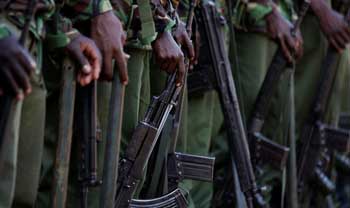 Nearly 40% of all guns are in hands of US citizens, according to report that says rich countries hold more weapons than poorer nations

Latest statistics show the proliferation of privately owned guns is on the rise, with wealthy countries outstripping developing and war-torn countries.

In a detailed report, weapons watchdog the Small Arms Survey has researched the numbers of guns across 230 countries.

Examining the ownership of revolvers and self-loading pistols, rifles, carbines, assault rifles and sub- and light machine guns, held by civilian, military and law-enforcement groups, their latest report shows there are now estimated to be more than 1bn firearms in the world – an increase of 17% over the past 10 years.

The majority of the arms, 85% (857m), are estimated to be held by civilians (including individuals, private security firms, non-state armed groups and gangs); while law enforcement agencies own 2% (23m) and military stockpiles account for 13% (133m).

In comparison, the Small Arms Survey 2007 report found there were 875m combined civilian, law enforcement and military firearms in the world, of which 650m were in civilian hands, a rise of 32% since 2007.

Examining the issues surrounding US gun control, the Pew Research Center found that one-third of Americans over 50 said they owned a gun, while this figure fell to 28% among 18- to 29-year-olds.

In 2016, 64% of murders in the US involved the use of firearms. There have been 90 mass shootings (three or more people killed) since 1982, according to investigative magazine Mother Jones. As of 2016, 42.3% of US hunters/shooters reported owning at least one AR-15 platform (M16-style) rifle, according to surveys commissioned by the National Shooting Sports Foundation (NSSF).

“The indications are that US civilians will continue to acquire firearms with acquisition averaging around 14m guns annually during the last five years … the US contributes disproportionately to the increase of the global firearms stockpile,” said Aaron Karp, Small Arms Survey’s senior consultant.

The Annual Firearms Manufacturing and Export Report, published by the the US Justice Department’s Bureau of Alcohol, Tobacco, Firearms and Explosives states that US companies have manufactured more than 150m firearms since 1986, the majority of which were sold domestically.

In second place behind the US for the total number of civilian weapons is India, with 71m firearms and in third, China with 50m. However, when analysed by number of weapons per 100 residents, second to the US is Yemen with 52.8 guns and in third place Montenegro and Serbia with 39.1 per 100 residents. In contrast are Indonesia, Japan and Malawi, which hold less than one firearm for every 100 residents.

The latest findings suggest that developing countries often associated with violence show the greatest reduction in weapons held per capita: an indication that gun ownership may continue to correlate with rising levels of wealth.

“Accessing accurate data for small arms is always a difficult task. In the arms trade, small arms are considered the cancer of any society, as they facilitate human rights abuses, criminality, insurrection as well as murder, particularly in developing countries or countries subject to war,” said Martin Drew, British arms trade expert and government consultant.

“These governments need to have the capacity to control the registration and movement of such weapons, as well as implementing legislation with a capacity to enforce it. The also have to contend with the issue of longevity. Revolvers can survive up to 100 years, AK-47 assault rifles 50 years and ammunition 40 years. The figures for the US might appear significantly high, however this may be due to accurate record keeping.”