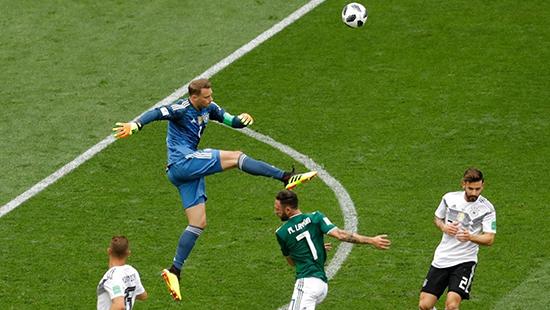 Some Mexican supporters shouted the slur when German goalkeeper Manuel Neuer was readying for a goal kick in the Group F match on Sunday. Mexico upset the defending World Cup champions and won the match 1-0.

Fans of the Mexican national team have long shouted the insult whenever a goalkeeper of the opposition’s team takes a goal kick. Widely considered a slur, some argue there is no discriminatory intent.

“Further updates will be communicated in due course,” FIFA said in a statement. “As proceedings are ongoing please understand we cannot comment further at this stage.”

The Mexican soccer federation has been repeatedly fined by FIFA over fans chanting the slur in recent years, but the sanctions haven’t escalated. The federation and players have previously urged fans to stop the chant to avoid further punishment.

In 2016, for example, the federation launched a campaign aimed at embracing diversity and fighting discimination called “Abrazados por el Fútbol” (“Embraced by Soccer”). A PSA video for the initiative featured members of the national team like longtime captain Rafael Marquez, forward Javier “Chicharito” Hernandez and defender Miguel Layún. The video urged fans that their one chant should be “goal!”

The Court of Arbitration for Sport canceled two fines against Mexico in November, ruling the chant was “insulting” but not meant to offend, though it left other fines in force.

FIFA is using a new anti-discrimination procedure for the World Cup, under which referees are instructed to stop the game for an announcement on the public address system when discriminatory behavior is seen or heard. If it continues, the official could suspend the game, and then abandon it if the behavior persists.

Mexico’s next World Cup match is on Saturday against South Korea.