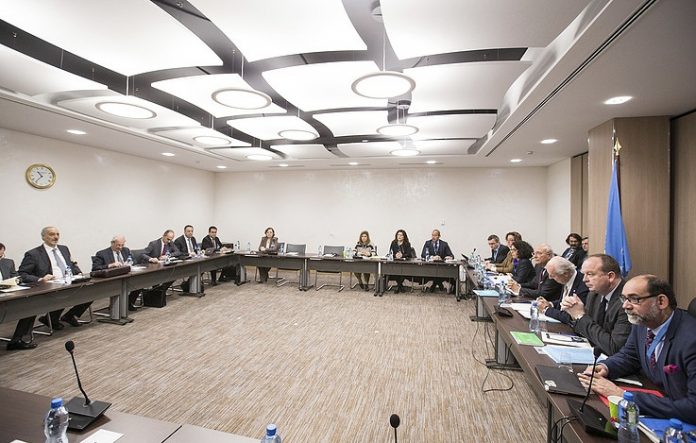 In essence, the countries united in the Astana format of negotiations on Syria will hold a visiting session in Geneva.

GENEVA, June 18. /TASS/. High representatives of the countries acting as guarantors of ceasefire in Syria – Russia, Iran and Turkey – meet in Geneva on Monday to discuss the setting up of the Syrian Constitutional Committee with the special envoy of the UN Secretary General for Syria, Staffan de Mistura.

The parties to the discussions will spend the whole day in bilateral consultations and a plenary session will likely be held on Tuesday, June 19.

In essence, the countries united in the Astana format of negotiations on Syria will hold a visiting session in Geneva.

Staffan de Mistura has been actively holding consultations in the past months. He visited Egypt on June 11, Teheran on June 9 and Istanbul on June 6.

While in Turkey, he had meetings with Turkish government officials and the Syrian opposition – the High Negotiating Committee and the National Coalition of Syrian Opposition and Revolutionary Forces.

De Mistura said on June 12 in Cairo the further continuation of the Syrian conflict would pose danger for security across the entire region.

He invited the official representatives of France, Germany, Jordan, Saudi Arabia, and the US to the consultations in Geneva.

De Mistura will continue consultations after the trilateral Russian-Iranian-Turkish meeting.

Representatives of the Syrian opposition, too, are expected to come to Geneva. Unlike the Syrian government, they have not submitted their lists of delegates for taking part in the formation of the constitutional committee but De Mistura said serious efforts were underway to draw the opposition list.

Agreement on setting up the constitution committee was reached on January 30 at the Syrian National Dialogue Congress in Sochi. The committee will draft proposals for Syria’s new constitution in cooperation with De Mistura.

As many as 150 persons have been nominated for the committee to date and 100 of them are representatives of the government or moderate [internal] opposition. The opposition based outside of Syria has named 50 delegates so far.

On the face of it, De Mistura believes that the committee’s membership should be limited to 50 persons in all

Convocation of the 2nd Syrian National Dialogue Congress depends on progress with this issue. The special envoy of the Russian President to the Middle East and North Africa, Deputy Foreign Minister Mikhail Bogdanov says the problem will be discussed, too.

Moscow has said more than once only the Syrians themselves can map out their country’s destiny at the conference table in line with the UN Security Council resolution 2254.

“Russia has never positioned itself as a side in the inter-Syrian confrontation,” Bogdanov said in this connection. “We have been urging the Syrians from the very start to launch a broad dialogue. Today, too, Russia doesn’t see any other opportunity for settling the Syrian conflict than on the basis of Resolution 2254, which envisions joint steps by the parties to the conflict on the constitutional reform and organizing fair election where all the Syrians will take part under UN supervision.”.