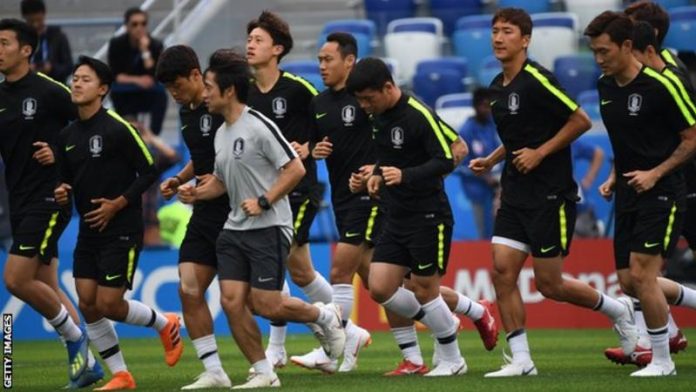 South Korea’s coach says he made his players wear different numbered shirts in recent friendlies to confuse opponents who he says cannot tell them apart.

Meanwhile, Sweden’s manager has apologised after claims one of his scouts spied on a closed South Korea training session.

“We switched them around because we didn’t want to show our opponents everything and to try and confuse them,” said Tae-yong.

“They might know a few of our players but it is very difficult for Westerners to distinguish between Asians and that’s why we did that.

“All coaches probably feel their opponents are always spying on them.

“I think it’s perfectly natural that we all try to get as much information on each other as we can.”

In his pre-game press conference, Swedish coach Janne Andersson addressed accusations that one of his scouts, Lasse Jacobsson, covertly watched the Koreans prepare in Austria.

This will be Janne Andersson’s first major tournament as manager. He will attempt to become the first Sweden boss to take his team past the last 16 since Tommy Svensson in 1994.

“It’s very important we show respect to all our opponents in all circumstances. If someone could interpret it in another way we regret it.

“It’s been made a mountain out of a molehill.”

Monday’s match between the two sides could be pivotal for their progress in a difficult group also featuring world champions Germany and Mexico.

“We have had excellent preparations.”