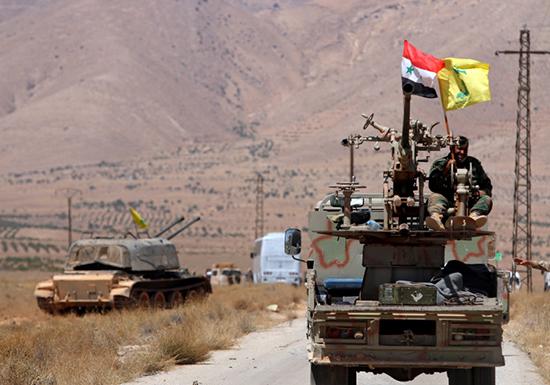 A US official claims Israel struck Iranian-backed Iraqi militia in Syria, and now Tehran must think twice about moving fighters across the porous border.

Tehran must re-adjust its policy in Syria a day after an airstrike killed and wounded dozens of Iranian-backed Shi’ite Kata’ib Hezbollah members in Syria near the Iraqi border.

The first of its kind strike, targeting Iraqi militias who have been crossing into Syria to aid the Assad regime since last year, sought to cut off Iran’s “road to the sea” by striking at a strategic area near the border town of Albu Kamal.

A US official told CNN Monday that the airstrike targeting Kata’ib Hezbollah members was carried out by Israel. This came eighteen hours after the Syrian regime had blamed the US-led coalition for the airstrike that hit near Syrian regime soldiers and their foreign militia allies.

In the background of the strike stands Iran’s attempt to construct a network of friendly forces stretching from Iraq through Syria to Hezbollah in Lebanon. In 2016, pro-western sources in Iraq warned that Iran was building just such a conduit. In December 2017, The New Arab reported that convoys of unmarked vehicle had passed into Syria from Iraq through checkpoints manned by the Hashd al-Shaabi, the mostly Shi’ite militias that are known as Popular Mobilization Units (PMU).

These militias play a complex role, forming one of a patchwork of similar groups that Iran’s Islamic Revolutionary Guard Corps has enlisted to support, train and seed throughout the region. Along with Hezbollah in Lebanon, Iran also helped train PMU fighters in Syria.Danny Danon, Israel’s ambassador to the United Nations, said in April that Iran had trained 80,000 militia members in Syria.

There are thought to be some 100,000 Iraqi members of the PMU, which include groups such as the Badr Brigade and Kata’ib Hezbollah. Kata’ib Hezbollah’s leader Abu Mahdi Al-Muhandis is a close ally of IRGC Quds Force commander Qasem Soleimani, and in 2017 he even bragged that his units in Iraq were working with Lebanese Hezbollah.

Since 2017, units like Kata’ib Hezbollah, under the umbrella of the PMU, have been incorporated into the official paramilitary forces of Iraq. Iraqi Prime Minister Haider al-Abadi praised the militias as the “hope of Iraq and the region” in October 2017, when then-US Secretary of State Rex Tillerson urged the militias to “go home” after the war with ISIS was complete. Instead of going home, the militias formed their own political party, called the Fatah Coalition, led by Badr’s Hadi al-Amiri. Fatah came in second place in Iraq’s elections, and has partnered with Muqtada al-Sadr in his attempt to form a coalition government. Kata’ib Hezbollah has called for the US to exit Iraq, which can serve as a reminder that the group fought against American troops after 2003 and was designated a terrorist organization in 2009.

Until the June 18 airstrike, Kata’ib Hezbollah’s 45th brigade of the PMU was operating in Iraq and Syria, ostensibly carrying out anti-ISIS operations near the border. After the air strike, the Iraqi government Joint Operations Command sought to distance itself from its own units that had crossed the border, saying that those members who crossed were not “regular” units, according to AlSumaria TV.

Iraq, an ally of the United States and a partner in the US-led coalition, recognizes that the presence of its militias are now more controversial following Secretary of State Mike Pompeo’s May speech excoriating Iran’s nefarious role in Iraq. “In Iraq, Iran sponsored Shia militia groups and terrorists to infiltrate and undermine the Iraqi Security Forces,” Pompeo said. Kata’ib Hezbollah forces have even flown their flags on US M1A1 Abrams tanks.

Prime Minister Benjamin Netanyahu said Sunday that he had spoken to Pompeo over the weekend. On June 17 Netanyahu tweeted in Arabic that “Iran must walk away from all Syrian territory…we will work against [Iranian] posturing throughout Syrian territory.”

Taken together with the CNN report that Israel carried out the airstrike, the picture painted for Iran and its allies in Iraq is that its path to the sea may be closing.