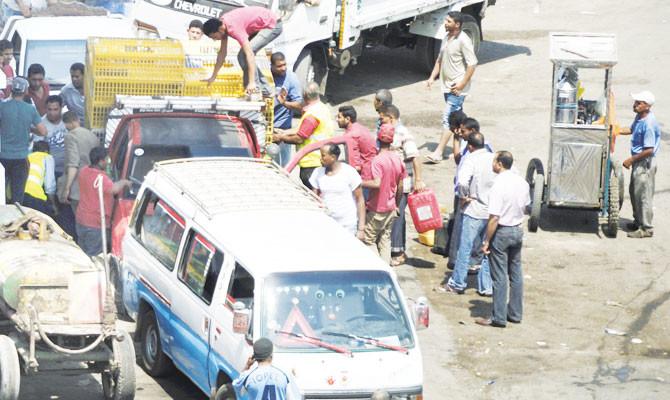 The 50-year-old used to pay 100 Egyptian pounds ($5.60) for 20 liters of 92 octane gasoline for his car. But after the government hiked fuel prices during Eid Al-Fitr, he now pays 135 pounds — a 35 percent increase.
“At least they should have done 10 percent only and in the next three-four months applied another increase. This is too much,” Ahmed, told Arab News.
The increase in fuel prices — the fourth since 2014 — have angered Egyptians already struggling to cope after hikes in the cost of drinking water, electricity and public transport.
Caused by the removal of subsidies, they are part of the painful austerity measures introduced by the government to service the country’s ailing economy.
The increases announced on Saturday included a 60 percent rise in the price of cooking gas. Prices for commercial use went from 60 to 100 pounds per cylinder and for home use from 30 to 50 pounds.
For gasoline, the increase averaged about 34 percent. For 92 octane, prices increased from 5 pounds to 6.75 pounds per liter and 80 octane increased from 3.65 to 5.5 pounds.
The new hikes will save up to $2.8 billion from funds allocated for state subsidies in the country’s 2018-19 budget, Oil Minister Tarek El-Molla said.
Finance Minister Mohamed Maait said that cutting fuel subsidies was necessary to help bridge the country’s budget deficit. A recent surge in crude prices has placed further pressure on Egypt’s deficit, as the country imports most of its oil.
The increases were met with angry reactions that varied from furious social media posts to calls for strikes and protests.
“What should we expect from the poor who can’t afford these rises,” said Walaa Mohamed, an engineer in Cairo. “People who have low salaries and don’t have anything else, how can they support their kids, clothing and transportation? Should they steal, beg or commit suicide?”
Mohamed El-Yamany, a Cairo resident, said that basic economics says that a government in such a tough position as Egypt’s should also work on industrial projects, fight corruption, deal with tax evasion and fight the parallel economy.
“Fix all of this first and then let’s talk about subsidy lifts,” El-Yamany said.
Another Cairo resident, who did not want to be named, said: “We can handle the price increases if it was planned gradually over five years. This sudden increase means that prices will double soon in a few months. It is really frustrating us in Eid and the solution is to have a civil strike.”
The government has also increased the price of drinking water by up to 45 percent, electricity by 26 percent, and raised metro fares 250 percent in the past few weeks. The metro fare prices rise were met with some protests.
After the 2011 uprising that toppled former President Hosni Mubarak, the economy of Egypt has been in deep trouble.
Egypt’s President Abdel Fattah El-Sisi declared that Egypt’s spending to cover fuel, food and electricity is $18.6 billion a year and he plans to slash these figures.
While the minimum salary has remained the same for four years, the price of diesel has risen five-fold, cooking gas has increased by 15-fold and 92 octane gasoline by 360 percent.
In 2016, Egypt secured a three-year $12 billion bailout loan from the International Monetary Fund by introducing austerity measures that included currency floatation, cutting subsidies and raising value-added tax.
The current fiscal year 2017/18 looks promising according to the government, which is targeting a 5.8 percent growth rate, compared to the current 5.2 percent rate, as well as lowering the budget deficit from 10.9 percent in the fiscal year 2016/17 to 8.4 percent.