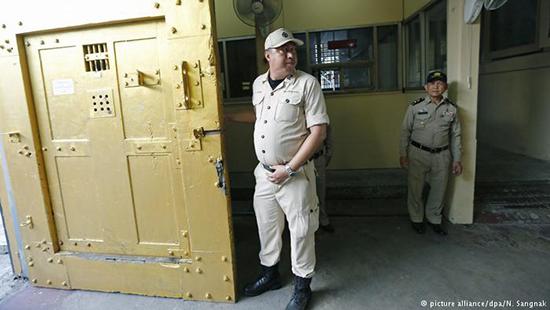 Thailand has drawn condemnation from human rights groups after conducting its first execution in nearly a decade. The executed man had been found guilty of brutally stabbing to death a teenager in a mobile phone robbery.

Thailand’s Department of Corrections on Tuesday said it had executed 26-year-old convicted murderer Theerasak Longji by lethal injection, six years after his conviction.

The department said the execution had taken place “as a reminder to those who think of committing serious crimes,” adding that Thailand was not planning to follow a global shift away from capital punishment.

“Even though many countries have abolished the death sentence, there are still many other countries that still use it, such as the United States and China,” a statement said.

The department said it prioritized “the protection of society and citizens to not become victims of crimes over the priority of the human rights of those who had violated the law.”

The execution took place at Bang Kwang Central Prison, north of Bangkok. Theerasak was the seventh convict to be executed by the method since it was introduced in 2003 as a replacement to the firing squad. Since then, six people have been put to death — the last being two drug traffickers in August 2009.

Theerasak’s conviction of aggravated murder was for stabbing his 17-year-old victim 24 times before stealing his cellphone.

The death penalty is still in place in a number of Asian countries, including Singapore, Indonesia, Japan and China, which remains the world’s top executioner.

Figures from Thailand’s Ministry of Justice show 510 people were on death row at the end of 2017.

Human rights group Amnesty International said the execution was a “deplorable violation of the right to life,” accusing Thailand of reneging on past commitments toward abolishing the death penalty.

Meanwhile, the International Federation of Human Rights also condemned the move as a “betrayal.”

The federation said the kingdom would have achieved the status of “de facto abolitionist” had it not carried out any executions before August 24, 2019 — which would have represented 10 years after the last death sentences were carried out.