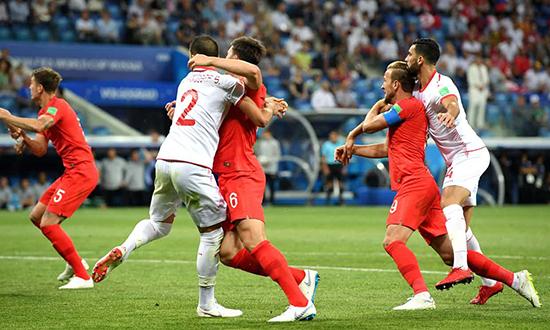 Kane scored his second goal of the game with a clever header as Gareth Southgate’s side recorded England’s first win in the opening game of a major tournament since they beat Paraguay in the 2006 World Cup.

England’s captain gave them the reward they deserved for a brilliant start by turning in the opener in the 11th minute after Tunisia keeper Mouez Hassen, who went off injured in the first half, clawed out John Stones’ header.

England ran Tunisia ragged in that spell but were punished for missing a host of chances when Tunisia’s Ferjani Sassi equalised from the penalty spot against the run of play after Kyle Walker was penalised for an elbow on Fakhreddine Ben Youssef.

Tunisia dug in to frustrate England in the second half but Kane was the match-winner with a late header from Harry Maguire’s flick, justice being done after referee Wilmar Roldan and the video assistant referee (VAR) had failed to spot him clearly being wrestled to the ground twice in the penalty area.

England play Panama, who lost 3-0 to Belgium earlier on Monday, in their next Group G game on Sunday, which kicks off at 13:00 BST and will be shown live on the BBC.

England’s first-half display contained much to admire but it was a sign of their wastefulness in front of goal that it took the injury-time intervention from Kane to seal victory.

England flew at Tunisia and racked up chance after chance, with only Kane’s early goal after Hassen clawed out Stones’ header to show for it.

Dele Alli saw a header deflected on to the woodwork, while Jesse Lingard suffered a similar fate as well as seeing Hassen somehow block another effort with an outstretched leg.

Jordan Henderson had a shot saved and other chances were spurned as England fashioned some magnificent approach play only to fail to apply the final flourish.

It was remarkable that Tunisia reached half-time on levels terms as they were often bewildered by England’s pace and movement before being spared by their generosity in front of goal.

Luckily for England, they have a world-class striker with a golden touch in Kane, who was coolness personified to carefully direct in the winner.

England can now move on to face Panama in Nizhny Novgorod with confidence and momentum.

Sterling the enigma once more

It was 983 days since Raheem Sterling’s last goal for England as he stepped out to face Tunisia – and that barren run continues after another night of international frustration for the Manchester City forward.

Sterling’s attitude and ability is never in doubt, never ducking a challenge or dropping his intensity, but the numbers are simply not stacking up at England level.

He became more assured in front of goal in Manchester City’s history-making 100-point Premier League title win last season. He seems, however, to feel the old anxieties with England.

Sterling was grateful that a glaring miss from Lingard’s pass was rescued by a linesman’s flag against the Manchester United midfielder, but he almost tried too hard as the game progressed and was running up blind alleys before he was replaced by Marcus Rashford after 68 minutes.

Sterling has now failed to score in his past 21 England appearances, while attempting 24 shots – a very grim statistic.

He received a warm embrace from Southgate as he went off, but it is time a rare natural ability was transformed into end product for his country.

England complained long and loud about the penalty awarded against Walker, but had much greater cause for grievance over the failure of VAR to give them two spot-kicks of their own.

Kane was the victim in incidents plucked straight from the world of wrestling in each half, and on neither occasion did any of the officials – on the pitch or in the VAR booth – see fit to intervene in what were obvious penalties.

In the first half, amid some heavy traffic, Kane was dragged crudely to the ground by Sassi and suffered similar treatment after the break, only for the incident to be ignored once again by Roldan and his assistants.

Justice was done in the end, but these were glaring errors.

It was made clear in a pre-tournament referees’ briefing that such grappling would be taken seriously and punished, so England have every right to ask why this edict was not carried out.

VAR is undoubtedly a progressive development, but if it is applied with such inconsistency it will stretch its credibility to breaking point.

Careless England must wise up

England’s domination of the first half was almost total, but they somehow contrived to allow Tunisia to raise themselves off the floor by virtue of rank carelessness from Southgate’s side.

Maguire was a culprit, conceding possession in dangerous areas in a manner that will be punished ruthlessly by teams with more attacking quality than Tunisia.

While England felt hard done by with Tunisia’s penalty, Walker naively got himself into a very poor position.

Ultimately, England did not suffer the ultimate punishment of it costing them points, but they have certainly had an early warning.

Southgate, a defender by trade, will surely have noticed the flaws and will be working hard to address them at England’s Zelenogorsk training base.

Kane became the first England player to score twice in a World Cup match since Gary Lineker against Cameroon in Italy in 1990.

Captain Kane is able – the stats