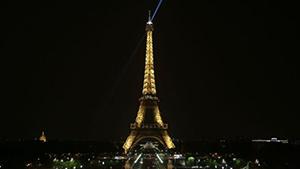 PARIS – A 28-year-old housewife with no criminal record has been unmasked as the person behind a major French “dark web” site that sold drugs and guns until it was shut down last week.

Agents from the DNRED intelligence agency seized nearly 4,000 euros in cash and around 25,000 euros ($29,000) in online currencies while swooping on the suspects in four simultaneous raids around France.

The mother of two, who went by various online pseudonyms including “Anouchka” and “Hades,” did not create the site but worked as its administrator, a DNRED agent said on condition of anonymity.

“A woman active at that level, it’s pretty unusual,” the agent said, adding that Anouchka, who did not have a job, was arrested near the northern city of Lille.

Although she did not have what he termed the “geeky profile of an IT technician,” this was not her first experience on the dark net, he added.

Around 40 DNRED agents were involved in the year-long operation, “the first of its kind in France,” according to public accounts minister Gerald Darmanin.

Several other dark net sites where drugs, guns and even contracts for assassination jobs are exchanged online — most famously the notorious Silk Road — have been smashed around the world in recent years.

The DNRED officer said it was difficult to determine how much money passed through Black Hand, but he estimated that Anouchka earned tens of thousands of euros a year from its operations.

Two others who acted as moderators and who sold illicit items on the site have been charged, as well as another vendor, following police raids near the cities of Montpellier and Marseille, as well as Lille.

They were among dozens of active users on the forum, which had 3,000 listed accounts.

The moderators had various ways of making money, the source said, charging membership fees of 25 to 50 euros as well as commissions of 2 to 5 percent on transactions.

Members could also pay to get a higher rating on the site.

Although the raids have not yet led to more arrests, “we continue to take an interest in the buyers,” the agent said, adding that Black Hand’s former users will be watching the investigation closely.

“They’re right to be worried,” he said.

He noted the site had been running since at least 2015 — a considerably long time by the standards of the dark net, where “platforms are often volatile because crooks often run off with the takings.”