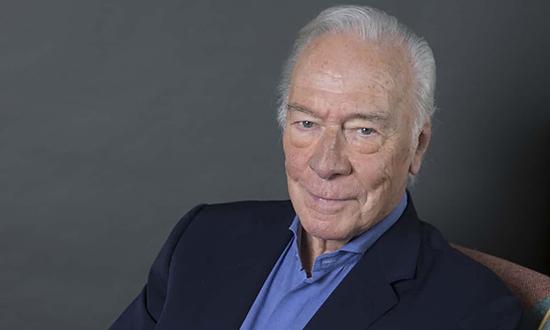 The Oscar-winning actor talks about replacing Kevin Spacey, why he finds marijuana boring and how he’s grown to stop hating The Sound of Music

Jack Jaconi, the geriatric weed dealer played by Christopher Plummer in new indie dramedy Boundaries, sees life through the rearview. This is true in the literal sense – the film follows Jack and his adult daughter Laura (Vera Farmiga) on a cross-country relocation after his entrepreneurial streak gets him expelled from his retirement community – but this journey has a deeper elegiac energy to it, taking Jack on a tour through a past dotted with mistakes and regret.

“There’s a lot of reflection to it,” Plummer muses, from the plush theater in the basement of New York’s Crosby Street hotel. “There’s a similar reflective quality in each role I take on these days.”

Plummer has started to gravitate towards lions in winter, men approaching a hard-won repose after a life rich with experience. At 88, having conquered acting under every imaginable criterion, it’s not hard to see why. While his quick wit and throaty laugh betray an intact sense of vitality, Plummer has truly seen it all. By his own description, he sounds like Alexander, surveying the enormity of his kingdom and wondering what challenges might lie beyond the horizon: “I’ve done things that I’ve been proud of. I’ve managed to finish the cycle of the great, classic roles. I’ve played them all, some more than once. That’s out of my way now – I’d like to see women come and play them. But the parts I’m receiving in films now are wonderful, the last 10 parts have all been fascinating.”

With everything from Cyrano de Bergerac to Shakespeare under his belt, Plummer’s entered a new phase of his career defined by introspection and the elusiveness of closure. Boundaries finds Plummer playing against type, relaxed and caddish instead of prim and proper, the kind of post-hippie relic liable to fire up a vape pen with an old pal played by counter-culture icon Peter Fonda. (For the record, Plummer doesn’t touch the stuff himself: “I stuck to booze, thank you very much, didn’t have anything to do with the drug world. I tried marijuana once – put me to sleep. I found it so boring!”)

Jack’s also a petty crook, a negligent father and a pathologically selfish manipulator. As Laura flounders in her own efforts at self-improvement, she plumbs the depths of her father’s dysfunction and gains new insight on just how poor an example he’s set for her. The film’s primary arc is less about whether Jack can still find redemption himself, and more about whether he’s even interested in trying.

“I wanted to slum it like mad,” Plummer recalls. “[Writer-director Shana Feste] reminds me a bit of Salinger. She’s got an edgy, simple style that’s very playable. I didn’t think it’d really sing until I did it all out loud and it worked like a treat. I go for scripts like this, that have a style of their own … She’s not afraid to make her heroes miserable sons of bitches.”

As a callous man plotting his final chapters, Jack offers a natural point of comparison with tight-fisted billionaire J Paul Getty, a role that presented Plummer with one of those tests of skill he’s been searching for. Plummer made headlines last winter when director Ridley Scott tapped him to replace a disgraced Kevin Spacey in All the Money in the World, a retelling of the 1973 kidnapping that opened a bitter rift in an American oil dynasty. Plummer signed on the dotted line weeks before the film’s scheduled premiere, a turnaround rate all but unheard of in an industry with slow-turning wheels. Ever the consummate professional, Plummer made it work and picked up an Oscar nomination along the way.

“I had a wonderful time!” he says. “At first, I was just concerned, ‘Am I going to be able to remember all this?’ because I had no time to study my lines. I had one or two days before we hit England. To my great relief, I found that I could manage. Everything was made very comfortable by Ridley, he wanted to make everything as easy as possible, for which I’m very grateful. But he also has a real sense of risk, clearly, and he loves doing things he’s not sure he’ll pull off.”

That risk had a fitting reward, netting Plummer awards attention and an unlikely bump in his online profile as the new go-to guy to step in for any and all fired actors. “At the time, I thought, ‘What am I doing? Am I getting awards attention just for keeping my lines straight on short notice?’ The first one, the Golden Globe nomination, I’m pretty sure that came out while we were still shooting! I’m exaggerating, but it was insane, everything happened over a course of weeks. It felt like doing theatre.”

And where his newfound viral fame is concerned, he is not entirely unaware. “I have heard about these, I always chuckle. The latest one was Roseanne! Why not bring me in to play Roseanne for the next season, I couldn’t believe this. I think it’s hilarious!”

2018 marks six decades since Plummer made his big-screen debut in the little-seen drama Stage Struck, and his relationship to his own career continues to change. Among the ranks of nobles and professors, there’s one bugaboo from his filmography in particular that continues to haunt him, and finally accepting it reoriented his entire understanding of success.

“It’s extraordinary, what people want to talk about during a chance meeting,” Plummer says. “The movies I like best, no one seems to care about, that’s always the way. I suppose The Sound of Music is the most popular role I’ve ever done, I really can’t avoid it.”

For untold years, fans would warble a few bars of a Von Trapp family standard at Plummer every time he stepped foot outside his front door – enough to try any mortal’s patience. But Plummer confides that time has a way of rendering the cynical soft, and the soft cynical; he counts himself among the former camp.

“It did [drive me crazy] for a long time, but I’ve made my peace with it. It annoyed the hell out of me at first. I thought, ‘Don’t these people ever see another movie? Is this the only one they’ve ever seen?’ It doesn’t even have to be my movie, I just wanted to take them to some movies they ought to see. But I’m grateful to the film, and to Robert Wise, who’s a great director and a gentleman, and to Julie [Andrews], who’s remained a terrific friend. I must have been miserable to work with at the time, because I was furious they wouldn’t let me sing. I’d worked on my singing for so long, but in those days, they’d have someone trained who would sing through dubbing. I said, ‘The only reason I did this bloody thing was so I could do a musical on stage on film!’”

To punctuate the reminiscence, he uncorks another one of his room-filling laughs. Maybe people are just inclined to hear such things when in an august presence, but this writer swears there are wistful notes under the joviality. Plummer’s lived a lot of life, and he performs like it. The nice thing about life, however, is that there’s always more of it to be lived, so long as we’re alive.

“Acting is never boring,” Plummer observes, casting his glance over to the theater’s proscenium. “We all pooh-pooh it from time to time, because it can often be hard work, but it’s never boring. Never.”