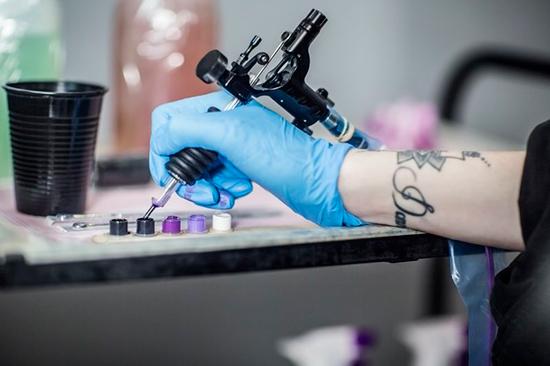 Doctors in Scotland believe a woman’s large tattoo on her leg may have been the cause of her unexplained inflammation and severe leg pain.

The authors of a report on the woman’s case, published in BMJ Case Reports, say it is a reminder to physicians that they should be mindful of their patients’ tattoos if they encounter unusual and unexplained symptoms.

The 31-year-old woman was suffering a condition called inflammatory myopathy, which affected her left leg and caused pain severe enough to disrupt her sleep.

The woman had a double lung transplant in 2009, and was taking drugs to suppress her immune system so she would not reject the donated organ. Test after test revealed no obvious cause for her pain, and when it didn’t abate after 10 months, she had a biopsy of the thigh muscle, which finally revealed the inflammation.

Doctors then speculated that a large, multi-colored tattoo she had received on the left thigh might have contributed to her condition. “Nobody had inquired about the tattoo. But given she had unusual symptoms that were otherwise unexplainable and the onset of this pathology was at the same time and location as the tattoo, that sent the bells ringing for us thinking that there was a possible link,” says Dr. William Wilson, a trauma and orthopedic surgeon at University of Glasgow, who is the lead author of the case study.

Wilson says he can’t prove that the tattoo actually caused the woman’s inflammation, but says that the possibility should be considered. He says her previous health history, and the fact that she also developed diabetes related to cystic fibrosis is unlikely to have contributed to the muscle inflammation.

More doctors, he says, should be inquiring about tattoos especially among people who might have weakened immune systems and in cases where symptoms don’t seem to have an obvious cause. “The learning point for the public is that if you are in one of the high risk groups such as the immune suppressed, consult your doctor before getting something like a tattoo or piercing where there is a skin breach involved, because you are at higher risk of infection and complications,” Wilson says.

Wilson and his team treated the woman with steroids, and after about a year of physical therapy, her symptoms started to subside but it took three years for the pain to disappear and the strength to return to her leg.

“For some physicians, discussing tattoos might seem awkward, but doctors should be thinking about tattoos and risks when people present with unusual symptoms that are not obviously explainable,” says Wilson. “Doctors need to consider [tattoos] might be a risk factor.”