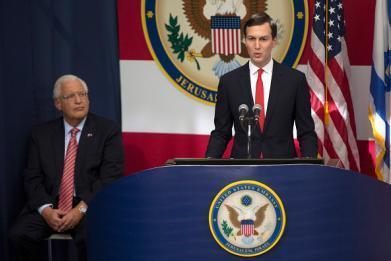 Jared Kushner, White House senior adviser and the president’s son-in-law, is on a trip around the Middle East to promote his long-touted peace plan.

On Tuesday, Kushner and Mideast negotiator Jason Greenblatt met with Jordan’s King Abdullah to discuss the administration’s efforts to broker a peace deal between the Palestinians and Israel. The deal’s details remain secret, but Kushner also brought up the issue of the ongoing humanitarian crisis in the Gaza Strip, according to the White House. Reports suggest the Trump administration plans to use its close relationship with Qatar and Saudi Arabia to convince the Gulf nations to invest around $1 billion to assist the impoverished area and its nearly 2 million inhabitants.

Despite these efforts, the Trump administration appears to have lost much of its legitimacy with the Palestinians following its decision to move the U.S. Embassy from Tel Aviv to Jerusalem. The move angered Palestinians and people across the Middle East, who viewed it as tacit support for Israel’s claim over the entire city of Jerusalem.

“The credibility of the U.S. in the region to deliver on peace of any kind is just not there,” Amanda Kadlec, a Middle East analyst with the Rand Corp. in Washington, told Newsweek. “What did remain, however tenuous, was America’s long-standing role as a primary international facilitator of dialogue between the Israelis and the Palestinians.

“The U.S. administration’s move of the embassy from Tel Aviv to Jerusalem changed all that,” Kadlec continued. “It was perceived by Arab and Muslim communities as a turning point in the U.S. position away from attempts at resolution, however fruitless they were for decades, to actively stoking the fire.”

In a statement released shortly before Kushner’s visit to Jordan, Palestinian leader Mahmoud Abbas criticized the Trump administration’s plan to rehabilitate Gaza, calling it an attempt to drive a wedge between Palestinians in Gaza and the West Bank.

“The Palestinian leadership warns the countries of the region against cooperating with a move whose goal is to perpetuate the separation between Gaza and the West Bank and lead to concessions on Jerusalem and the holy sites,” Abbas said in the statement.

The situation in Gaza, however, is increasingly violent and in need of a solution. On Monday, the Israeli military launched attacks against Hamas, which controls Gaza. At least two Palestinians died that day after clashing with the Israeli military. Protests have been ongoing in the Gaza Strip since March, and dozens have been killed.

One expert says the Trump administration’s plans to inject money into Gaza will do little to resolve the region’s conflicts.

“Kushner is meeting with King Abdullah to generate support for his peace plan, but it doesn’t come at a great time for him. King Abdullah has had to spend the past month quelling the worst unrest in years, and providing cover for a new peace plan is not likely to top his list of priorities,” Chris Meserole, a Middle East expert at the Brookings Institution, told Newsweek, referring to the recent protests in Jordan that led to a government shake-up.

“Early reports suggest that Kushner is trying to sweeten the deal with several hundred million dollars in aid for Gaza,” Meserole added. “Yet the fighting in 2009 alone produced over $4 billion in damages, so it’s hard to see how a few hundred million will make the deal popular in the Arab world, especially since it is still fuming over the Trump administration’s decision to relocate the U.S. Embassy from Tel Aviv to Jerusalem.”