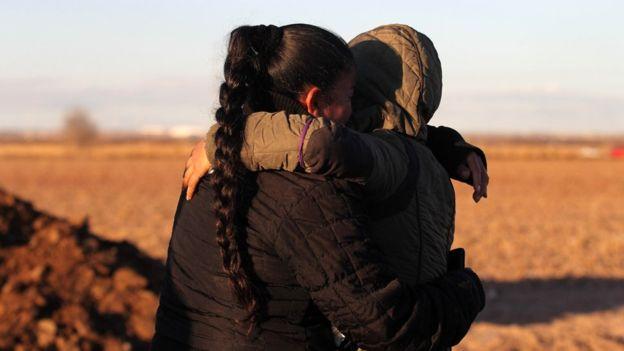 The claim: US President Donald Trump says the Democrats created a law that separates children from parents who cross the US-Mexico border illegally.

Verdict: There is no law on separating children from parents at the border, but rather a policy introduced recently by the Trump administration.

The policy has led to 1,995 children being separated from families at the border between 19 April and 31 May, in addition to a further 700 children since October 2017.

Changes under Mr Trump’s Zero-Tolerance Policy include expediting the process to determine eligibility to remain, promptly removing those who are denied, and criminally prosecuting migrants for first-time border offences, which were previously treated as civil violations.

Because the children of prosecuted migrants are not charged with any crime, they are not permitted to be jailed with their parents. But in addition to removing children from apprehended illegal migrants, children have been separated from asylum-seekers.

Seeking asylum is not illegal.

The president blamed Democrats for the policy. In May, he urged putting “pressure on the Democrats to end the horrible law that separates children (from) their parents once they cross the Border in the US”.

On 16 June, he tweeted “Democrats can fix their forced family break-up at the border by working with Republicans on new legislation, for a change!” and two days later accused the Democrats of being “weak and ineffective” with border security.

There is no law that mandates separating children from parents who cross the border illegally.

In 1997, Democratic President Bill Clinton signed the Flores Settlement law that required unaccompanied minors who arrive in the US to be released to their parents, a legal guardian or an adult relative, If no relatives are available then the relevant government agency can appoint an appropriate adult to look after the child.

And in 2008, Republican President George W. Bush signed an anti-trafficking statute that requires unaccompanied minors to be transferred out of immigration centres within 72 hours. Neither of these recommends separating families.

“If you don’t want your child separated, then don’t bring them across the border illegally,” said Attorney General Jeff Sessions.

He followed this up in several interviews, saying, “We’re doing the right thing. We’re taking care of these children.

“Our policies are discouraging people from making children endure that treacherous journey.”

In February, the American Civil Liberties Union filed a lawsuit on behalf of a mother from Congo to have her seven-year-old daughter returned to her, after the little girl was held separately for more than four months during their application for asylum. The same organisation is seeking a nationwide injunction against separating families.

On 16 June, First Lady Melania Trump made the same assertion as her husband, blaming politicians for her husband’s own policy.

Her spokesperson said: “Mrs Trump hates to see children separated from their families and hopes both sides of the aisle can finally come together to achieve successful immigration reform. She believes we need to be a country that follows all laws, but also a country that governs with heart.”