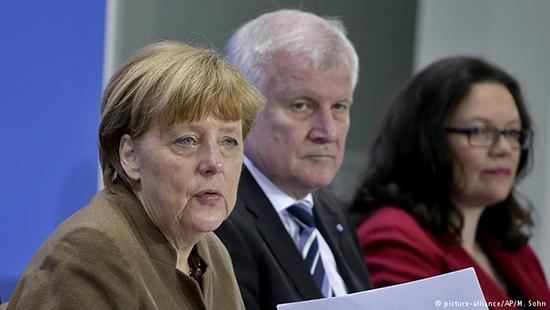 While Angela Merkel is locked in a bitter power struggle with her Bavarian allies, the third party in Germany’s government has stayed quiet. But the Social Democrats are not above making populist noises on asylum policy.

As the leaders of Germany’s two big conservative parties, the Christian Democratic Union (CDU) and the Bavarian Christian Social Union (CSU), engaged in fraught brinkmanship on Monday — with the question of Angela Merkel’s future dangling — the third party in Germany’s centrist coalition government struggled to make the media notice that it, too, has a say in what this administration does.

But, after Merkel (left in photo) and CSU leader Horst Seehofer (center) gave parallel press conferences on Monday, Social Democratic Party (SPD) leader Andrea Nahles (right) was eager to remind the public that, even if the CDU and CSU could come to an agreement about Interior Minister Seehofer’s asylum plan, it wouldn’t mean automatic agreement from the SPD. She promptly demanded a leadership summit between the three parties to hash out a course of action.

During a visit to Brussels on Tuesday, the SPD leader also declared that she didn’t expect the EU talks scheduled for June 28 and 29 to deliver an all-encompassing asylum deal — though she did think there was a chance that “voluntary agreements” across the bloc could bring “better procedures.”

Seehofer triggered Germany’s current political crisis last week by offering Merkel a plan that would turn refugees away at the border before they could apply for asylum. That would breach the European Union’s Dublin Regulation. Though Seehofer would not back down, on Monday he did allow Merkel two weeks to try to make agreements with EU partners and find a new asylum plan before the summit at the end of June.

In the bluster of the ensuing crisis, in which the CSU briefly threatened to break with Merkel’s CDU, it was easy to overlook the fact that the center-left SPD remains Germany’s second-biggest party both in the Bundestag and in opinion polls and controls six of the 15 government ministries.

The SPD had held its peace throughout the current crisis until Monday, but then senior Social Democrats began condemning the unseemly fight between their center-right partners — and to take sides. The SPD stepped in to defend Merkel from attacks from the CSU, which has shifted right on the issue as it prepares for a regional election in Bavaria in October.

“There will be no consensus in the cabinet and in the government without the agreement of the SPD,” the party’s Saarland chairwoman, Anke Rehlinger, told the Frankfurter Allgemeine Zeitung on Tuesday. “There will be no automatism — especially not for nonsense from Bavarian election campaign headquarters. A regional party cannot and must not be allowed to blackmail the government and the whole of Germany.”

Other SPD leaders accused Bavaria’s CSU state premier, Markus Söder, who is pressuring Seehofer from within the party, of endangering EU agreements. Deputy Chairman Thorsten Schäfer-Gümbel, for example, told the public broadcaster ZDF that the “personal power struggle in the two conservative parties could really make a lot of things unstable.”

“The CSU is risking a unified democratic Europe with its populism,” added SPD General Secretary Lars Klingbeil, who underlined the point on Monday by ordering the EU flag to be flown at party headquarters in Berlin.

Despite taking the moral high ground in the interparty mudslinging, the SPD also showed this week that it is not above making the odd populist signal when it comes to asylum policy.

The party’s complete position is not yet clear — the leadership intends to hash out concrete points in a meeting on Tuesday evening, talks that could be complicated by the fact that no one knows exactly what Seehofer’s 63-point plan consists of.

But Nahles has already said the SPD is in favor of implementing accelerated procedures for people who have already applied for asylum in another EU state.

Until now, accelerated procedures have only applied to applicants from what the German government classifies as “safe countries of origin.” This, Nahles believes, would represent a workable compromise that the CSU might accept: Applicants could be turned away more quickly, but without having to set up new border controls and therefore endanger the principle of free movement inside the European Union.

As Nahles pointed out, all three government parties want to speed up asylum procedures and turn more people away who have little chance of staying legally, “but it’s about how.” This is in keeping with her tougher approach. In late May, politicians on the left of the SPD accused her of pandering to right-wing rhetoric when she claimed that Germany “couldn’t take in all refugees.”

SPD Bundestag member Lars Castellucci went so far as to tweet that the statement was “stupid, dangerous and right. Stupid because not everyone wants or can come; dangerous because this statement is playing with fire; and right because it is objectively true and no one has ever claimed otherwise.”