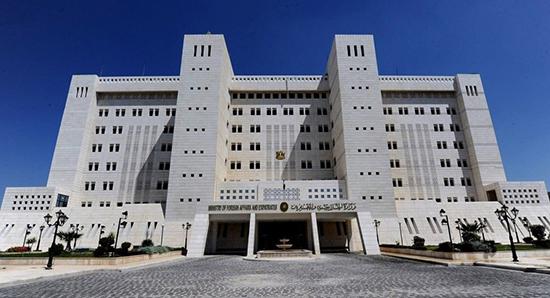 The Syrian Foreign Ministry has strongly condemned the Turkish and US military patrols in the country’s northern city of Manbij.

“Syria expresses its strong condemnation and absolute rejection of the incursion of Turkish and American forces in the vicinity of Manbij, which comes in the context of continued Turkish and American aggression,” an unnamed official from the country’s foreign ministry told the Syrian Arab News Agency (SANA) Tuesday.

The official also said that Damascus calls on the international community to condemn what they called the “aggressive behavior” on the part of US and Turkey, which constitutes a violation of the purposes and principles of the Charter of the United Nations.

Earlier on June 19, Sputnik reported that US-led coalition and Turkish forces have begun independent but coordinated patrols along a demarcation line near the Syrian town of Manbij while planning for joint patrols in the future, citing a US Central Command press release.

The UK’s Major General Felix Gedney, deputy commander of Operation Inherent Resolve’s Strategy and Support Combined Joint Task Force, said on his Twitter account that that these patrols are only aimed to ensure that various conflicting sides don’t clash with each other and instead focus on fighting Daesh remnants.

“These patrols outside #Manbij are intended to prevent clashes between forces operating in the area & ensure all parties can remain focused on #DefeatDaesh.”

​On Monday, Sputnik reported that a US and Turkish landing in Manbij has been negotiated by the Manbij Military Council, a part of the Syrian Democratic Forces, which are made up mostly of Kurdish militias called People’s Protection Units (YPG).

Earlier this month, the US State Department said that Turkish Foreign Minister Mevlut Cavusoglu and US Secretary of State Mike Pompeo had endorsed a roadmap to ensure stability in Manbij.

The US-backed YPG, which Turkey considers a terrorist group, have agreed to retreat to the east side of the Euphrates River, meeting a longstanding demand by Ankara. If the website Syria.liveuamap.com is of any indication, Manbij and its vicinity was one of two major Kurdish protractions on the eastern bank of the Euphrates, the other one being Al-Tabqa, south of Raqqa.

The website map also shows an enclave of Kurdish forces located north of Aleppo, surrounded by Turkish and Syrian government zones of influence.