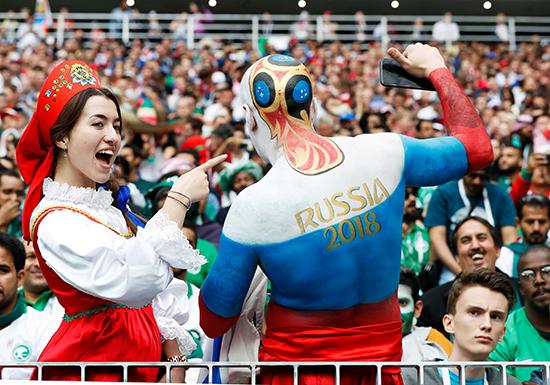 With every team having played at least one match, Guardian writers in Russia offer their first impressions

The political tensions and all the other issues with the Russian government will still be there when the World Cup leaves town, but it’s likely that a lot of people will depart Russia with great memories and a changed view of the country. Russia is putting on its best, most smiling face for the month: people are excited to welcome the tournament and the fans, and so far at least that is leading to overwhelmingly positive vibes. The cheap beer and warm sunshine in most host cities is not hindering this process, either. With Russian transport corridors all running through the capital, Moscow has become a hub for fans, with tens of thousands shuttling through for a couple of nights between games and creating a carnival atmosphere. Shaun Walker

“We are the victims of Fifa and the ever-developing football,” the Egypt goalkeeper Essam El Hadary lamented on Monday. His manager, Héctor Cúper, appeared to find the comment amusing and it is, after all, a well-established rite of passage that shot-stoppers line up to take a pop at the ball. Igor Akinfeev is another to have had his say about the Telstar 18, but it is hard to see what they are complaining about because this summer’s edition seems the most reliable for some time. If the litmus test for a ball’s performance is the way it behaves on long-range shots and deliveries into the box then it has passed. Free-kicks from Aleksandr Golovin, Cristiano Ronaldo and Aleksandar Kolarov have left keepers helpless because the players were able to trust their technique rather than worry about the flight. A high number of goals from crossed set-pieces speaks partly of organisational issues but also comes down to the fact that this ball can reliably be placed on a sixpence. “The football might be more acceptable to the players than the goalkeepers,” El Hadary conceded, and perhaps that is the best indicator that all is, in fact, as it should be. Nick Ames

Video Assistant Refereeing is proving more divisive than decisive with nations asking Fifa for clarification on why VAR wasn’t used in certain situations. England were bemused as to why VAR wasn’t invoked when Harry Kane twice appeared to be rugby tackled in the box. There is clearly some ironing out to be done but in one department it is seemingly exerting a positive influence. It took until the 15th game of the tournament for the first red card to be issued, for Colombia’s Carlos Sánchez. That is the cleanest start to a World Cup since 1986. Martha Kelner

If only football was as easy as throwing together the best pieces and expecting them to fit into an instant jigsaw. France came to Russia with a familiar set of expectations – excitement about the talent pool tempered by doubts about how efficiently they would be used. Didier Deschamps was bold in moulding his team around the selection of three attackers who are all blessed with pace and trickery. In theory, who would want to play against Kylian Mbappé, Antoine Griezmann and Ousmane Dembélé? But in practice it didn’t quite work out. The chemistry was not immediate. The front players were often difficult to find, with a big space between them and the midfield. France did not attack with verve in their opening game against Australia and there is still work to do if this team is to find the right balance and bring out the best in itself. Amy Lawrence

Without wishing to tempt fate, it is starting to feel like the tournament will pass without all the obvious concerns – racism and the kind of violence that was seen in Euro 2016 – embarrassing Russia and scarring the competition. The only issue in the England camp so far are the swarms of bugs. And the biggest danger in Repino seems to be the wild dogs that roam in the woodlands. One member of the media entourage, cycling inland from England’s base, encountered a pack of them and was pursued for two miles before reaching safety. Daniel Taylor

Gareth Southgate spoke about seeking to change the perception of English football on the eve of his side’s opening group game against Tunisia and, while it will take far more than a stoppage time win over the team ranked 21st in the world to achieve that lofty ambition, everything to date suggests he can succeed in that task. England so often lower the mood at major finals, either through stodgy football or general underachievement, but this group seem different. They have been a breath of fresh air to date, a team well aware of their shortcomings but completely convinced of their qualities. No team has created as many chances as they did in that first half in Volgograd, and the English had never previously scored a stoppage time winner in normal time at the World Cup. The vim and verve stems from the manager and the philosophy he has imposed. They feel like a side who can thrive in Russia. Dominic Fifield

7) Brazilian insecurities must be suppressed

It was only one lapse, and Tite, his players and the rest of Brazil’s 200 million-plus population continue to insist that Switzerland’s equaliser in Rostov on Sunday ought to have been disallowed for a push. But something shocking happened after the goal went in. Brazil went to pieces. All of a sudden, their control was gone for a period of about 15 minutes. It seemed to chime with how Brazil lives its football – via wild extremes of emotion. Tite would talk about anxiety, huge pressure and opening-night nerves and it was easy to recall how the Selecao have been tracked by tears and trauma at previous World Cups, not least the last one. Brazil stabilised and they threw everything at Switzerland during a chaotic finale only for the winner to elude them. Tite’s squad have the talent. The biggest battle they face could be with their internal equilibrium. David Hytner

8) The fans are taking football to the streets

As a gaggle of Russian, Serbian and Costa Rican fans walked down Molodogvardeyskaya Ulitsa, in the centre of Samara, someone produced a football. It was past midnight and everybody was making their way home after a long day that started in the stadium and finished with a viewing of Brazil v Switzerland in the FanZone. Any tiredness was forgotten as an impromptu match broke out in the street, its participants bridging language issues with a pass here and a trick there. Russia and Serbia do, in fairness, have a long-established relationship but the scene was typical of the friendships that have been formed in the more provincial cities. The appetite for cultural exchange has been heartfelt: Samara, to take one example, was a closed city until 1991 and there has been visible emotion at the sight of football’s biggest show, and its accompanying melange of international visitors, rolling into town. It is genuinely heartwarming to see this opportunity being grasped so firmly. Nick Ames

What on earth is going on with all the set-piece goals at this World Cup? After only 15 games in Russia, we had witnessed more goals from direct free-kicks than in the entire tournament in Brazil. Colombia’s Juan Quintero joined Serbia’s Aleksandar Kolarov, Portugal’s Cristiano Ronaldo and Russia’s Aleksandr Golovin by beating a goalkeeper with a brilliant dead-ball strike from outside the area. Nine penalties have been given already (only 13 were awarded in total in Brazil) and 22 of the 38 goals (55%) scored in the first round of group matches came via a set-piece. In fact, the Colombia-Japan game delivered a clean sweep. On top of Quintero’s free-kick, Shinji Kagawa converted a penalty and Yuya Osako headed in Keisuke Honda’s corner. The introduction of VAR has clearly played a part in the penalty count but how do we explain the rest? Either way, Tony Pulis is having a field day. Stuart James

A World Cup in Brazil was always going to be well-attended by the other South American countries for obvious reasons, but it has been truly remarkable to see supporters from that part of the World travelling to Russia in such huge numbers and, in the case of Saransk, pretty much taking over the city and the stadium. Peru, who are the eighth-best supported country at the World Cup according to the number of official tickets sold in each nation, made the Mordovia Arena feel like a home venue against Denmark on Saturday. And Colombia, who sold 65,234 official tickets for these finals, which is more than twice as many as England, did something similar at the same stadium for their match against Japan on Tuesday. Listening to the stories that fans tell, explaining the sacrifices they have made, it shines through that watching their national team play means a lot more to them than people in many other countries, in particular in Europe and including England. Stuart James