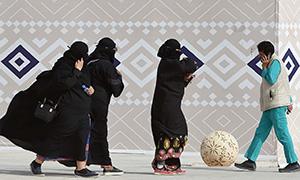 After years of human rights violations, and weeks before Saudi Arabia was set to lift its oppressive ban on women drivers, the government has arrested at least 11 women’s rights activists. The government has denied these women access to legal representation and charged them with colluding with foreign entities, a crime punishable by death.

This comes just weeks before the Saudi government was set to lift its controversial ban on female drivers, a move seen by many as an important step in the right direction. But by arresting the very activists responsible for the end of the ban, the government sends a clear message that Saudi women remain only half citizens. Drivers licenses or not, they still live under a system of male guardianship, and are especially vulnerable to exploitation and violence at the hands of their guardians.

Saudi women have long been calling for an end to this oppressive system, and Women’s March Global started a campaign at the end of May to get Saudi women’s rights activists released.

We are uplifting the voices of Saudi women like Amna Al-Juaid, who was forced to marry her cousin and recorded a viral video pleading for help escaping her abusive father. Or Dina Ali Lasloom, who attempted to escape a forced marriage by seeking asylum in Australia and has not been heard from since being sent back to Saudi Arabia.

Or like Samah, a brave Saudi Activist who has risked her safety to speak out about the arrests. After coming to the U.S. to complete her masters, Samah’s father demanded she return home and marry a man of his choosing. She decided to stay and seek asylum, and could be imprisoned or worse should she return home to Saudi Arabia.

Samah dreams of one day returning home to a country which is safe for women, and because of this in April, she joined several members of Women’s March Global from around the world to launch the Free Saudi Women Coalition (FSW), a coalition of activists from all over the world who have united together for the shared goal of fighting for Saudi women’s rights. Made up of Saudi women and international allies, the coalition works to communicate the plight of Saudi women to the rest of the world.

Thobeka from South Africa was a founding member of the coalition. “Human rights are a universal declaration that the world took upon itself to be responsible for. Feminism has connected all women regardless of race and ethnicity andthat I feel the need to act for my sisters who are in need.”

Upon hearing of these repressive arrests, that’s exactly what our coalition did: we started a Change.org petition asking the United Nations to use its power to get the activists released—and so far over 190,000 people from around the world have signed it, inspired by Saudi women’s courage.

The United Nations was founded on principles of international cooperation and human rights—yet somehow, it has done nothing to stop Saudi Arabia from denying women even the smallest of freedoms: freedom of mobility, of self-determination. Not only that, but Saudi Arabia has served on the UN Human Rights Council for over a decade.

The UN’s inaction in the face of gender oppression is incredibly irresponsible and dangerous for all the Saudi women living under an oppressive regime. Join Women’s March Global and the Free Saudi Women Coalition and add your name to the movement.

The fight for the freedom of all women is no small task, but when our global community of women comes together we can reach even the most powerful decision-makers.

Lara Stein is the Executive Director at Women’s March Global.​

The views expressed in this article are the author’s own.​​​