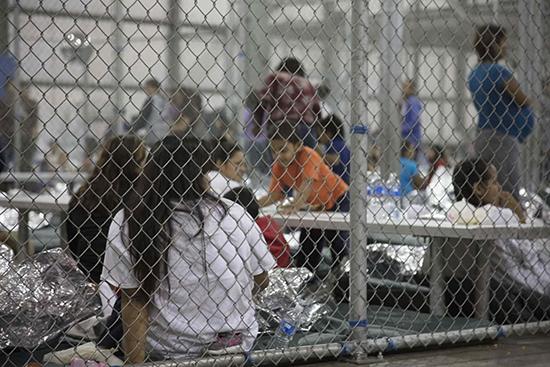 Donald Trump told Republicans he was “1000%” behind their immigration reform effort but did not offer a clear path forward as his administration faces extraordinary, bipartisan condemnation for its practice of separating children from their parents at the border.

At a close-door meeting with House Republicans on Capitol Hill, Trump expressed concern for the families being separated by the “zero-tolerance” policy, members said, but he did not take responsibility for the practice. Instead the president urged the Republicans in the room to pass legislation that keeps families together.

“The president does want this to end,” the congressman Carlos Curbelo, a centrist Republican from Florida who has led the charge for immigration reform, said after the meeting.

Curbelo said Trump told members his daughter, Ivanka, had appealed to him to stop separating families at the border. And yet Trump gave no indication he was willing to reverse the separation policy and did not acknowledge that he could stop the separations without legislation, he added. Instead, the president insisted Congress deliver a legislative solution.

Why are families being separated at US border?

Unbowed by mounting public anger from lawmakers, religious leaders, human rights advocates and business executives, Trump and top administration officials have fiercely defended the policy, which has led to the separation of more than 2,300 children from their parents in five weeks.

That anger was captured by a protester, who shouted at Trump as he walked through the Capitol before the meeting on Tuesday evening.

“Mr President, fuck you,” she yelled across the marbled rotunda.

As Trump left the session with Republicans, he faced a rare protest by members of Congress. The group of House Democrats shouted at the president to abandon his controversial immigration policy while waving signs that read: “Families Belong together”.

House Republicans – barreling toward a vote on a pair of immigration bills – were hoping the president would rally skeptical members of the caucus around a proposal that sought common ground between moderates and conservatives on an issue that has fiercely divided the party.

But instead Trump said he would sign either proposal that came to his desk, members said.

“He said we need to pass one of the two bills,” the congressman Kevin Yoder, a Republican of Kansas, said after the meeting. He added the president was “agnostic” about which of the two measures they should pass.

During his remarks, which were expected to focus on immigration, Trump spoke about his recent visit to North Korea and his trade policy, members said. He also openly mocked the Republican congressman Mark Sanford, a conservative critic of the president who lost his primary this month after Trump endorsed his opponent, they said.

The meeting on Capitol Hill came at a delicate moment for Republicans, as several lawmakers in both chambers rushed to defuse the spiraling political crisis sparked by the Trump administration’s immigration crackdown.

Mitch McConnell, the Senate majority leader, said that “all of the members of the Republican conference support a plan that keeps families together” and endorsed a narrow plan that would allow law enforcement to detain parents and children together while their immigration case is adjudicated in court. McConnell said he hoped to pass a bill as early as this week.

Any such legislation would require some support from Democrats, who immediately rebuffed the plan, arguing that Trump could unilaterally end the practice.

“There is no need for legislation,” the democratic leader, Chuck Schumer told reporters on Tuesday. “ There’s no need for anything else. You can do it. Mr President. You started it, you can stop it – plain and simple.”

Under the administration’s new enforcement policy, all adults are arrested for crossing the border illegally. As children cannot be held in an adult jail, they are held separately.

In the the House, Republicans have included a provision to end family separations in their compromise immigration proposal, which would also provide $25bn for Trump’s border wall and his other hardline security demands. The bill would also offer a pathway to citizenship to young undocumented immigrants, known as Dreamers. A rival bill, supported by a conservative bloc of Republicans, would not guarantee “Dreamers” a path to citizenship.

Trump did not discuss whether he would support a standalone measure should support for the immigration measures flounder. Trump has called on Democrats to come to the table and negotiate an end to the separations, inviting criticism that he is leveraging the crisis at the border to win support for his hardline immigration framework.

The House is expected to vote on the immigration measures this week and their fates are far from certain. But some Republicans left the meeting unsure of whether Trump’s visit had advanced their cause.