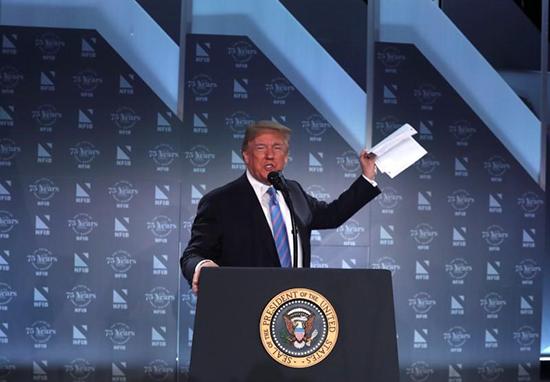 WASHINGTON (Reuters) – U.S. President Donald Trump said on Tuesday progress was being made in slow-moving talks to update the NAFTA trade accord between the United States, Canada and Mexico, but he held out the prospect of striking bilateral pacts if a three-way deal could not be reached.

“We’re trying to equalize it. It’s not easy but we’re getting there,” he told a group of U.S. small business executives. “We’ll see whether or not we can make a reasonable NAFTA deal.”

Renegotiating the North American Free Trade Agreement, which Trump called a “disaster” for the United States, was a goal he had set out during his election campaign.

Negotiations to modernize NAFTA started last August and were initially scheduled to finish by the end of December 2017.

That deadline has been extended several times as Canada and Mexico struggle to accommodate far-reaching U.S. demands for change, such as a sunset clause that would allow one nation to pull out after five years. Canada and Mexico reject the idea.

At a news conference in Mexico City, Mexican foreign minister Luis Videgaray said he expected the next negotiating meeting of ministers to be held in July.

The Canadian government believes a deal to update NAFTA is still possible despite a U.S. move to impose tariffs on Canadian and Mexican steel and aluminum, Foreign Minister Chrystia Freeland said in Ottawa on Tuesday.

Trade frictions between the United States and Canada have been particularly strained in recent weeks, with Trump taking umbrage at remarks by Canadian Prime Minister Justin Trudeau that were critical of the heavy U.S. tariffs.

Trump said on Tuesday the two nations had a good relationship but that Americans were being taken advantage of when it came to trade.

“We have to change our ways. We can no longer be the stupid country,” Trump said. “We want to be the smart country.”