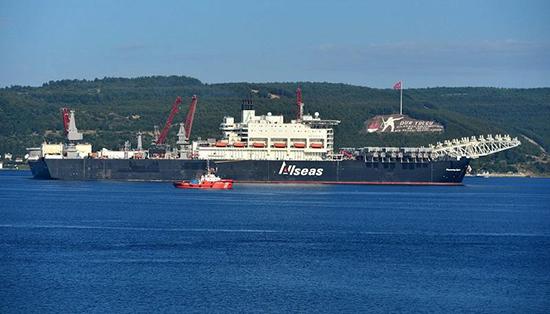 The world’s largest pipe-laying vessel, the “Pioneering Spirit,” passed through the Dardanelles Strait for the second time on June 19. The strait was temporarily closed to naval traffic.

The 382-meter-long vessel Pioneering Spirit, the size of several football fields, left Rotterdam port in the Netherlands on June 8, where it received maintenance and repair services.

The vessel is now sailing to the Black Sea in order to finish the deep-water construction of the second offshore line of TurkStream.

In a previous statement, Russian gas giant Gazprom had said the Pioneering Spirit completed the laying of the first of two projected lines for TurkStream and would return to continue the second portion of the deep-water pipeline in the third quarter of 2018.

The second line of the TurkStream natural gas pipeline will have a capacity of 15.75 billion cubic meters (bcm) per year and will carry Russian gas to European markets.

Gazprom plans to deliver the first batch of natural gas by December 2019 to the Turkish shore of Kıyıköy from the Russian shore of Anapa via the TurkStream pipeline.