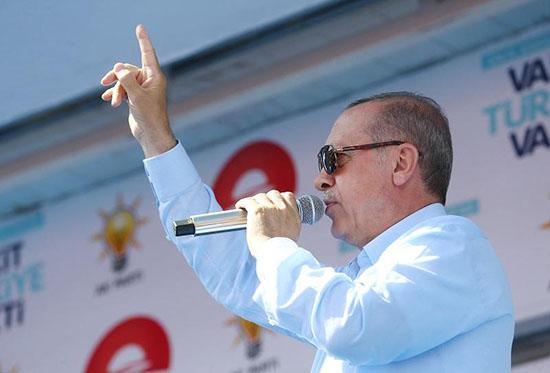 Turkey will continue striking the outlawed Kurdistan Workers’ Party (PKK) in the northern Iraqi province of Kandil, President Recep Tayyip Erdoğan has said, referring to the mountainous region that the militant group uses as its headquarters.

“We have struck 10 critical points in Kandil. We have also finished off a number of [PKK] leaders who were in a meeting,” Erdoğan said on June 20 at an election campaign rally in the southeastern province of Şanlıurfa.

Thanking locals for hosting the largest population of three million Syrian refugees taking shelter in Turkey, he also said the city’s south in Syria was handed from “one terror organization to another,” referring to the People’s Protection Units’ (YPG) takeover of Manbij from the Islamic State of Iraq and Levant (ISIL).

“But now we are almost there,” Erdoğan said, adding that Turkey is coordinating with the U.S. on “securing” Manbij.

“We will enter Afrin and Kandil,” Erdoğan said on June 19 at a rally in the southern province of Adana, speaking of the northern Syrian and northern Iraqi regions under Kurdish control and the outskirts of which have been entered by the Turkish Armed Forces.

Airstrikes on PKK targets in northern Iraq have been carried out regularly since July 2015, when a peace process between Ankara and the PKK broke down, but recently the Turkish military has stepped up the airstrikes, which officials refer to as a “new phase.”

Despite recent denials by both Iranian and Iraqi governments, Ankara has recently stepped up warnings of a potential ground offensive in the Kandil Mountains by the Iran-Iraq border.

Saying the military has “struck [the PKK] with jets,” Erdoğan then slammed his rival presidential candidates for the presidential elections on June 24.

“They are demoralizing our soldiers,” he said, targeting the main opposition Republican People’s Party (CHP) and its presidential candidate Muharrem İnce, accusing them of “trying to stop the fight against the PKK in Kandil.”

“As we break the terror nests they are getting concerned, along with their masters who stand on the other line of the phone,” he said.

Since the campaign for the snap elections began in April following a call jointly made by Erdoğan’s ruling Justice and Development Party (AKP) and the Nationalist Movement Party (MHP), the president has repeatedly slandered the CHP and accused it of having links to terrorism.

The accusations became more severe after İnce on May 9 paid a visit to Selahattin Demirtaş, jailed presidential candidate from the Kurdish issue-focused Peoples’ Democratic Party (HDP), in the Edirne prison in Turkey’s northwest.
Demirtaş has been in jail for a year-and-a-half on “terror” charges and faces up to 142 years behind bars if convicted.

“[Demirtaş] has caused Kurds to kill Kurds,” Erdoğan said, accusing him of being a “terrorist” responsible for the deaths of dozens by calling protests in Turkey’s southeast during the siege of the Syrian city of Kobane in October 2014 that turned violent.

The president then questioned the main opposition’s dedication to fighting terror.

“Have you heard the CHP make any statement on terror?” Erdoğan asked the crowd in Adana.

“We are waging a fight against terror. But after Mr. Muharrem declared his candidacy he went and visited the island in Edirne that is supported by the terror group,” he said.

“Are we ready to bury those who walk hand-in-hand with the terrorists on June 24?” he added.