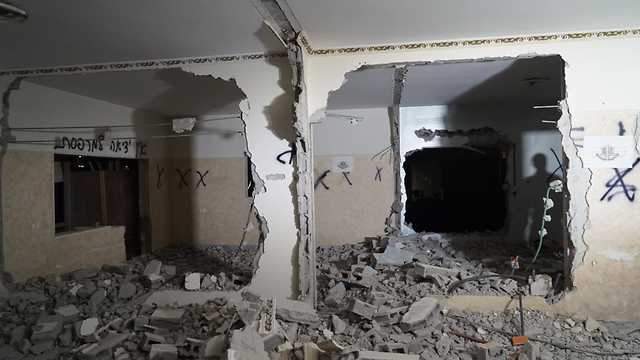 Alaa Kabha of the Palestinian village of Barta’a murdered Captain Ziv Daus and Sergeant Netanel Kahalani in a car-ramming attack near the settlement of Mevo Dotan in mid March.

The IDF on Thursday morning destroyed the home of terrorist Alaa Kabha of the Palestinian village of Barta’a, who murdered Captain Ziv Daus and Sergeant Netanel Kahalani in a car-ramming attack on March 16 near the settlement of Mevo Dotan.

The demolition was carried out by forces from the Menashe Territorial Brigade together with Border Police fighters and the Civil Administration.

Kabha was lightly to moderately hurt in the attack. He was evacuated to the Hillel Yaffe Medical Center in Hadera, where he was interrogated. He had served time in prison for security forces in the past and was released from Israeli prison in April 2017.

After the attack, the IDF raided his home and questioned his family members. His younger brother was detained for questioning by the security forces.

The Shin Bet released a statement saying that while the terrorist initially insisted the attack was merely a road accident, he confessed under interrogation to having acted under nationalistic motives. Kabha acted as a lone-wolf terrorist without the guidance of a terror organization.

Hamas praised the attack, which took place 100 days after US President Donald Trump recognized Israel as Jerusalem’s capital, saying that “it proves the intifada is going on.”

Ziv Daus was a company commander with the army’s search and rescue brigade, whereas Netanel Kahalani was a driver in Menashe Territorial Brigade routine security operations. The two received the customary posthumous promotions to higher ranks.