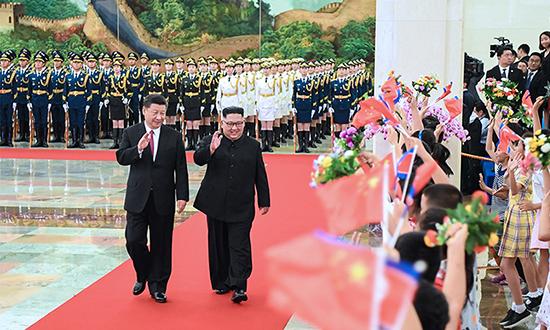 The two leaders had a candid and in-depth exchange of views on the current development of China-DPRK (Democratic People’s Republic of Korea or North Korea) relations and the situation on the Korean Peninsula, the Xinhua News Agency reported on Tuesday.

They agreed to safeguard, consolidate and develop China-North Korea relations, and jointly push forward the sound momentum of peace and stability of the Korean Peninsula to make a positive contribution to safeguarding world and regional peace, stability, prosperity and development, Xinhua reported.

Kim visited China in March and May, at which times Xi met with him in Beijing and Dalian, Northeast China’s Liaoning Province.

The latest trip follows Kim’s summit with US President Donald Trump in Singapore, in which the two signed an agreement on denuclearization and established a new relationship.

“Kim discussed details on implementing the agreement signed in Singapore as North Korea needs assistance on denuclearization and China is an indispensable part of a peace treaty on the Korean Peninsula,” Zhang Huizhi, vice dean of the Northeast Asian Studies College at Jilin University, told the Global Times on Tuesday.

Lü Chao, a research fellow on North Korea at the Liaoning Academy of Social Sciences, told the Global Times that North Korea hopes China can serve as a mediator to make sure the US realizes its promise to provide security to North Korea.

“The US also wants China to help it urge North Korea to commit to denuclearization and that’s why US Secretary of State Mike Pompeo went to China last week to give a briefing on the Singapore summit,” Lü said.

Xi met with Pompeo at the Great Hall of the People in Beijing on Thursday. Xi said that China and the US should strengthen communication and coordination on major international and regional issues and those with global significance, Xinhua reported.

Zhang also said that as a concerned party, China has played an active role in promoting the peace process on the Korean Peninsula and will continue to broker negotiations between the US and North Korea, especially on the most disputed issue — the US stance on a complete, verifiable, and irreversible dismantlement — while North Korea insists on a step-by-step denuclearization plan.

China’s dual suspension proposal — North Korea stops weapons tests and the US and South Korea stop military drills — has worked out, and the current situation on the Korean Peninsula is favorable for both sides, Zhang said.

South Korea and the US have decided to “suspend” all planning activities for the Ulchi Freedom Guardian, a computer-simulated command post exercise that was scheduled for August, the South Korean Defense Ministry said Tuesday.

The South Korean Defense Ministry said it will continue to consult with its US counterpart on further measures, noting that no decision had yet been made on “other war games” between Seoul and Washington.