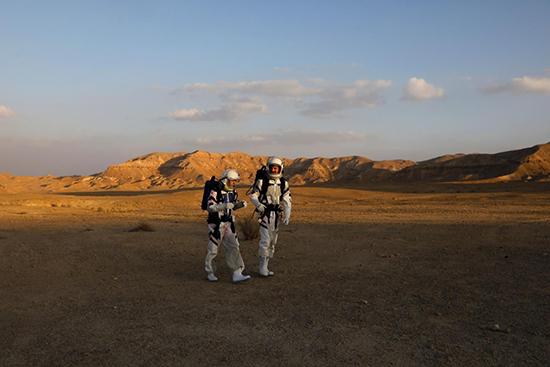 A new NASA mission could put humans back on the moon—and soon after, for the first time, Mars.

Robots could land on the moon as early as next year as the precursor to planned human lunar travel, NASA announced Monday. The program was launched as part of a directive President Donald Trump signed in December to continue lunar exploration and begin human-led Mars missions in the 2030s.

The commercial delivery missions will send NASA technology to the moon’s surface to build a lunar base to determine if the environment is suitable for human exploration. Extractors will drill for water and other volatiles, or compounds removed from lunar poles and craters using heat. The ice on Mars could fuel spacecraft if efforts are successful, said NASA administrator Jim Bridenstine in a statement.

“We know there are volatiles at the poles on the moon, and quite frankly, that water ice could represent rocket fuel,” he said. “If we have the capability to generate rocket fuel from the surface of the moon, and get them into orbit around the moon, we could use that to build a fueling depot.”

Engineers introduced the idea of robot substitutes in 2010 after the Obama administration nixed NASA’s program to send astraunauts back to the moon—a $150 billion feat—in favor of targeting uncharted territory, such as asteroids. For a significantly lower cost, a NASA team planned to send “humanoid robots” to the moon less than three years later.

As of 2018, however, no robots have made it. Americans haven’t gone to the moon since 1972’s Apollo 17 mission. The last lunar rover, nicknamed the “Jade Rabbit,” belonged to China, and it died in 2016 after spending more than two years traversing the moon’s surface.

In December 2017, Trump revived the National Space Council after 25 years of dormancy, a move he said would cement the administration’s dedication to space travel. The first item on the council’s agenda is expanding space commerce to the moon for “long-term use and exploration.”

“This time, we will not only plant our flag and leave our footprint; we will establish a foundation for an eventual mission to Mars, and perhaps someday to many worlds beyond,” he said at the signing ceremony.

It’s unlikely Trump will see another “small step for man” during his presidency, though. NASA officials said it would likely take 10 years to launch another human lunar mission, and even longer to get to Mars.

But travel to the red planet is closer than ever, thanks to new evidence that the planet could house life, which could hasten plans for human exploration. Earlier this month, the Curiosity rover found organic carbons once contained in a Martian lake 3 billion years ago.

The space race to Mars is tight: China’s space agency vowed to send astronauts to Mars by the end of 2020, and Vladimir Putin said Russian manned missions to the planet would closely follow 2019’s crewless launches. Both countries emphasized lunar travel in their plans.

In efforts to achieve “American dominance in space,” Trump announced a military Space Force, an idea he first proposed as a joke in March.

“We don’t want China and Russia and other countries leading us,” he said in the announcement. “As long as it’s an American rich person, that’s good.”