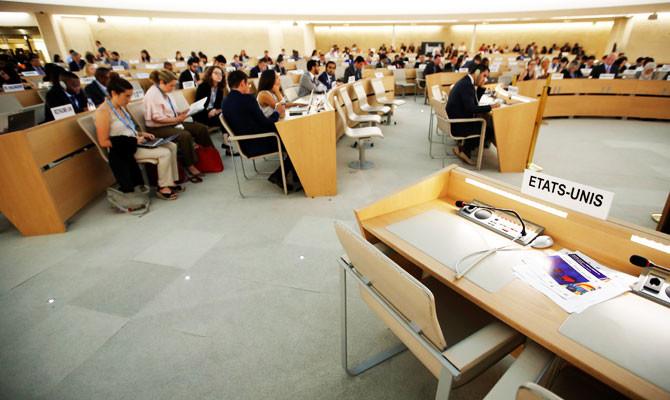 GENEVA: Diplomats from across the globe defended the UN Human Rights Council on Wednesday after the US withdrew from a body it branded an anti-Israel “cesspool.”
Slovenian ambassador Vojislav Suc, who currently holds the council’s rotating presidency and has been pushing a faltering reform drive, described the Geneva-based chamber as the best place to trigger action on dangerous rights crises.
“Let me say it very clearly, if human rights issues are not discussed here, in this very room, they have little chance to be dealt with meaningfully anywhere else,” he told the council’s 38th session, hours after Washington announced its pullout.
Suc further praised the 47-member council as the “only intergovernmental body responding to human rights issues and situations worldwide.”
Once he receives formal notification of the US withdrawal, Suc said he would arrange for the American seat to be removed and work with the General Assembly to elect a replacement member. China, which has on multiple occasions voiced support for multilateral institutions abandoned by US President Donald Trump, portrayed the council as “a major body… to promote the realization of human rights.”
“All delegations attach great importance to this body,” said Chinese ambassador to the UN in Geneva, Yu Jianhua.
China currently sits on the council and rights groups have repeatedly criticized Beijing for seeking to stifle criticism of its own conduct.
The EU assured that it “remains steadfastly and reliably committed to the Human Rights Council,” and said it would continue to try to fix the body’s problems despite the US withdrawal.
Russia’s Foreign Ministry had earlier accused the US of “gross cynicism” and “disregard” for the UN.
US Secretary of State Mike Pompeo and UN ambassador Nikki Haley announced the decision on Wednesday, making good on a threat Haley made in Geneva a year ago.
They said their calls for change, notably to fix “hypocrisy” and “unrelenting bias” against Israel were ignored.
Membership of the council, established in 2006 to replace the disgraced Human Rights Commission, has long been controversial.
Current members include Burundi, the Philippines and Venezuela — all nations accused of massive abuses against civilians.
But the main US objection was the council’s Agenda Item 7, which mandates discussion of Israel at each of the three annual sessions.
Israel is the only country recorded as a dedicated agenda item.
While Israeli Prime Minister Benjamin Netanyahu praised the US withdrawal, experts and diplomats have noted that without US pushback, resolutions approving investigations of Israel’s conduct in the Occupied Palestinian Territories could multiply.