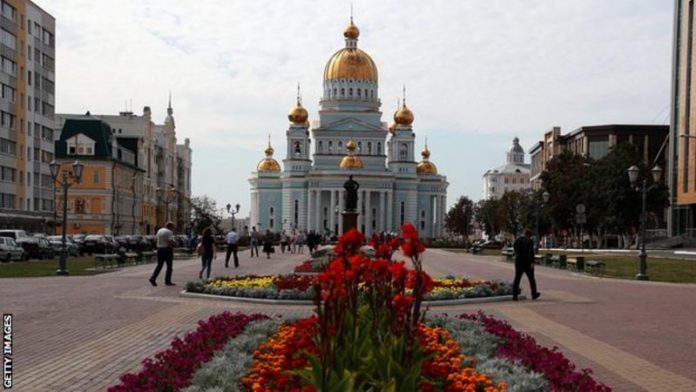 By Patrick Jennings-BBC Sport in Russia

I was only in town half an hour before I saw him – a man taking his overweight cat for a walk, down the road and under a bridge on a makeshift lead.

Nobody could really tell me what Saransk, the capital of Mordovia and about 430 miles east of Moscow, would be like, but this was an interesting start.

Welcome to the city nobody expected to host the World Cup.

Speaking to Russians in Moscow, the reaction was always the same: a scrunched nose, two raised eyebrows, and a sympathetic tone. “Ah, so you’re going to Saransk…”

But this week, this city of around 300,000 people has, in the words of one of the so many brilliant local volunteers, “gone from its usual grey dullness to one big party full of life”. Thirty thousand Peruvians will do that for you.

Let’s start at the beginning. It was a nightmare to get to the hotel on Saturday morning. For some reason, the local government thought it was a good idea to totally shut off the main roads on matchday as the hours ticked down until Peru played Denmark.

The fans from Peru who got off my plane carrying inflatable llamas and wearing giant plastic ears were a column of noise as they walked straight through this one-baggage-belt airport in no time at all. There was a bus waiting, but things would soon slow down.

By way of explanation, there was a shrug from a policeman whose oversized hat slipped as he gestured down the road. I was meant to understand that actually this is all quite normal.

The next day, after Denmark beat Peru 1-0, the roads were reopened. Metal-box buses clanked and chugged along as a suped-up hatchback with one lime-green tyre rim raced past, blaring techno music as it went. Maybe the closures did make sense.

I walked down Communist Street, down Lenin Avenue, crossed Proletarian Road and through the Fifa Fan Fest on Soviet Square. Not far from there, Lyubov, Sasha and Tatyana were sitting on a bench in Pushkin Park watching a new world walking by.

There were Colombia shirts, Denmark, a few Japanese. Many Peruvians had stayed and were dancing to music they asked a kebab hut to play through its loudspeakers.

“How can you not enjoy it? It’s one big party,” Sasha said. “I’m really happy that our town was chosen and we’ve seen all this. And it’s brought improvements – the city has changed a lot in the past five years I would say, it’s cleaner now and they’ve made it more attractive.” Delivered with two big thumbs up.

You can see the investment in the new stadium, the new university building facade, the new shopping centre across from that. But you don’t have to walk far away from the centre to reach Saransk’s more ramshackle outskirts.

Traditional wooden houses near Saransk city centre. Some of these have been demolished to make way for World Cup infrastructure.

Traditional wooden houses generally inhabited by elderly men and women remain where, in other parts of the city – like in the new hotel complex by the stadium, they have been destroyed to make way for the new.

At one end of the street is the four-star hotel where the Colombia team stayed. Five young boys are hanging around, debating how long they might have to wait there to get a glimpse.

One of the many security guards eventually saunters past in the heat and says without stopping: “You can’t sit on this wall.”

Artur, 15, is possibly the most excited in this group. He says: “Even people in Russia haven’t heard of Saransk. You tell people and they say: ‘Where?’

“It’s brilliant that all this is happening – so cool.”

Anton, Danil, Artur and Faridyn were all optimistic about Saransk’s future prospects

Maybe that is why the city is so keen to impress. Every fan I spoke to here had the same story: welcoming, beautiful weather, great atmosphere. Yes, the prices have been hiked up, but veterans of past tournaments had seen all that before.

I spoke to Viktor, one of five men working in a team of gardeners, a coin collector with hands like bark.

“It’s a small place, Saransk. Everyone was surprised when they said the World Cup would be coming,” he said. “Now people will know we are here.”

I didn’t ask Viktor about politics, about who he voted for – but in March’s presidential elections Vladimir Putin attracted more than 85% of the votes here, compared to 76% nationally.

Later, Oleg grabbed me in the street and was almost breathless in his excitement when I told him I was from England. The night before Colombia played Japan, we walked to Millennium Square together, where women in local Mordovian dress were singing traditional, pleasingly atonal, folk songs. Some in the crowd danced with Colombians – that was the real centre of attention.

On a warm evening, with swifts flying overhead and shashlik smoke drifting across the square, a Colombian television presenter addressed her audience back home – a glimpse of this unknown place sent out across the world.

On the way back home later that night, I passed a Colombian fan who had brought his white husky with him, all the way from Medellin. “Yeah, you have to say they have done a really good job and it’s great to be here,” he said. “First time in Russia, lovely people. Very curious about us.”

Speaking of the curious, down a side street soon after that I saw yet another overweight cat, this time carried in a woman’s arms.

Just what is it about this place?

But for all the sense of happiness the World Cup has brought to Saransk there is also the question – a now familiar World Cup question – of legacy. What will happen to all of this once the party ends?

The stadium is brand new, opened this year. Next season it will welcome Mordovia Saransk, a team who two years ago were in the third tier and last year struggled to pay their players. The capacity will be reduced from 45,000 down to about 30,000.

Saransk’s old stadium, over the river and down the road, was this week being used as a practice venue for the presentation ceremonies that take place before the games here. What will happen to that?

What about the entirely new district built up around the stadium. It used to be a boggy wasteland. What will it be next? Will people move here?

Time will tell. Mordovia president Vladimir Volkov said on Friday before I got here: “We will do all we can to ensure that the World Cup legacy will continue to serve the people.”

Artur and his friends are only thinking about the future positively. How will you feel in a few weeks’ time I ask, once Cristiano Ronaldo has been and gone? “We’ll still be in high spirits,” says Faridyn, the eldest of the group at 16, almost 17.

“We’re happy now, and we’ll still be happy. Now people will know more about Saransk and this is really good.”

A curious place then, happy on the surface as it lives through maybe the biggest week in its history.