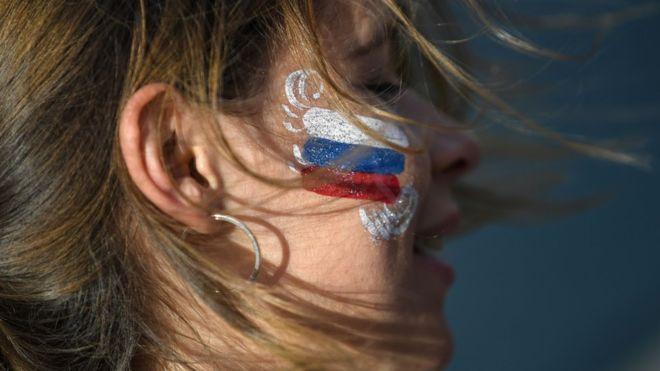 By BBC Monitoring The world through its media

The Russian arm of the fast-food chain Burger King has apologised after offering women a reward of 3m roubles (£36,000; $47,000) and free Whopper burgers for life if they got pregnant with a World Cup player’s baby.

“Women who manage to get the best football genes will promote the Russian team’s success for generations to come,” the advert said.

The promotion caused public outrage in the competition’s host nation, forcing the company to delete it. “This is a direct reflection of the level our society is at towards women,” said one feminist community on the messaging app Telegram.

In advertising and in the media, Russian women are being portrayed as sexual predators hunting their prey.

Articles in the pro-Kremlin media describe the way they “bait foreign fans” and chat them up.

In one YouTube video, a state TV host says that “hundreds or thousands of vamps have flocked to Moscow” in the hope of meeting foreign football fans.

Sports website Championat has also been publishing a daily roundup of “top World Cup beauties”, and some prominent bloggers have followed suit.

This kind of rhetoric is hardly new in post-communist Russia where feminist voices are little heard. Gender-role debates get short shrift on Russian TV, and if programmes come across anything remotely feminist, it is often dismissed as Western propaganda trying to undermine Russian traditional values.

And yet there doesn’t seem to be much push-back from Russian women.

Women’s rights activist Alyona Popova told the BBC that there was a lack of assertiveness among Russian women.

“If men are shouting from every corner that a woman is just a body, and find excuses to justify sexual harassment, and blame victims of domestic abuse for what happened, then women start thinking that this is the norm,” she said.

Ms Popova referred to a recent sexual harassment scandal involving high-profile Russian MP Leonid Slutsky, who was accused by several journalists of sexual misconduct. Despite the public outrage, the MP managed to retain his post after parliament’s ethics commission cleared him of all allegations.

When a video surfaced showing Brazilian football fans singing a vulgar chant in Portuguese with a Russian woman, there was uproar in Brazil, but little reaction in Russia itself.

The woman, who apparently speaks no Portuguese, is seen smiling and trying to sing along with Brazilian fans, not realising that the chant is about part of her anatomy. “I guess she thinks they’re promising to take her overseas. Fail,” joked one popular Telegram account.

An online petition in Russia calling on authorities to prosecute those involved has attracted some 2,500 signatures. Some of those involved in the chant have already been identified in the Brazilian press.

At present there is no legislation regarding harassment in Russia, although attempts to table a bill were made after the Slutsky scandal.

“We should fight for a new image for women in the media. Instead, they use every opportunity to promote the wrong image,” says Ms Popova.