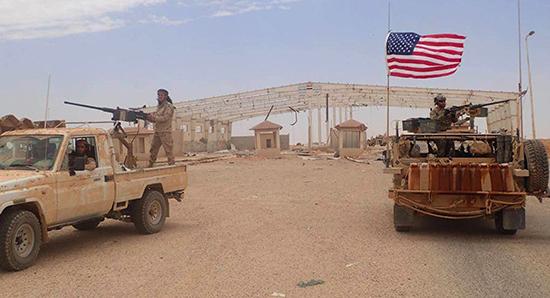 The spokesperson for the US-led international anti-Daesh coalition told Sputnik, it had responded to the attack by “unidentified hostile force” near Syria’s al-Tanf, reporting that there were no casualties.

“Maghawir al-Thowra fighters and Coalition advisors within the de-escalation zone near al-Tanf were engaged by an unidentified hostile force located just outside the de-escalation zone in the early evening of June 21,” the Public Affairs Office for Joint Task Force Operation Inherent Resolve spokesperson said in an email.

According to the official, during the incident, coalition advisers and Maghawir al-Thowra fighters returned fire in self-defense, after which the other part disengaged.

The coalition representatives immediately contacted Russian military about the issue.

“Coalition officials are engaged with Russian counterparts on the deconfliction [de-escalation] line to ensure no miscalculations,” the spokesperson added.

This attack occurred just a day after the coalition had performed an airstrike on Syrian army positions in the east of Homs province. The sudden strike has claimed the life of a Syrian officer, leaving several other Syrian soldiers injured.

The US-led coalition has been carrying out airstrikes against Daesh* targets in Syria since 2014. The coalition’s mission was neither approved by Damascus nor the UN. Currently, about 2,000 US troops are deployed in Syria.

*Daesh (ISIL/ISIS/Islamic State), a terrorist group banned in Russia, the United States and many other countries