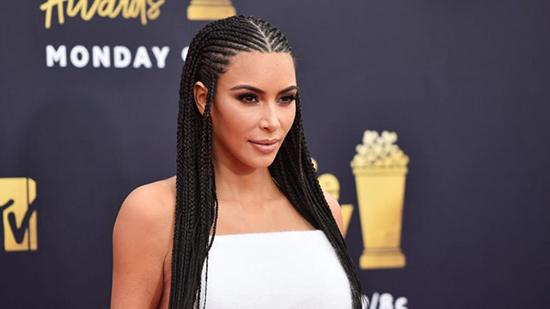 Kim Kardashian West is defending her most recent beauty look, claiming she “didn’t see backlash” and is “not tone deaf” for sporting Fulani braids to the 2018 MTV Movie & TV Awards on Sunday.

The reality star declared in a Bustle interview that she never intended to “disrespect anyone’s culture by wearing braids” and that she found inspiration for the hairstyle from her 5-year-old daughter, North.

“I actually didn’t see backlash. I actually did that look because North said she wanted braids and asked if I would do them with her. So we braided her hair and then we braided my hair,” the 37-year-old mother of three said of the look that sparked outcry on social media.

After arriving at the awards show with the long, tight braids that have roots in African culture, Twitter commentators were quick to call out Kardashian’s ‘do as “cultural appropriation,” noting that the “Keeping Up with the Kardashians” star has not only opted for the hairstyle before, to similar outcry, but that she has also previously referred to the cornrow-style as her “Bo Derek” look.

“I [do] remember the backlash when I had the blonde hair and that I called them “Bo Derek braids.” But I obviously know they’re called Fulani braids and I know the origin of where they came from and I’m totally respectful of that. I’m not tone deaf to where I don’t get it. I do get it,” she added.

The media mogul further claimed that the braids were a celebratory nod to her biracial daughter’s naturally curly tresses.

“Maybe if I had come out and explained that from the beginning instead of calling them ‘Bo Derek braids,’ then it wouldn’t have gotten such backlash. But in no way am I ever trying to disrespect anyone’s culture by wearing braids,” Kardashian mused. “If anything, my daughter was so excited to see me get matching braids with her.”

This is the second hairstyle headache for Kardashian in recent days, following backlash over images of North stepping out with straight locks in New York City for her fifth birthday festivities, Bustle reported.

In any case, Kardashian’s latest braids were short-lived, as she stepped out with wavy tresses again just a few days later.