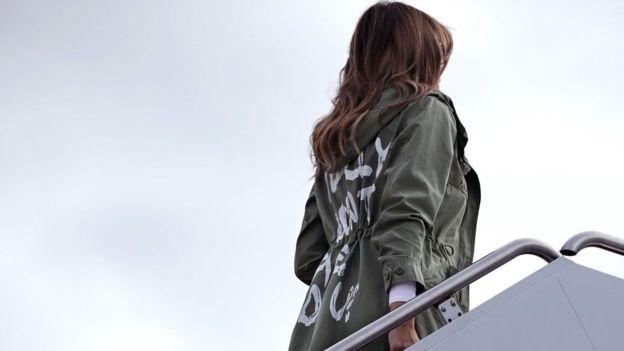 The Pentagon has been asked to supply up to 20,000 beds at old military bases for migrant children held after illegally entering the US.

Beds will be for migrant children who crossed the border unaccompanied, as well as those separated from parents.

But her visit to the facility for young migrants was thrown into controversy after she was photographed wearing a jacket with the words “I really don’t care do u?” as she boarded the plane to Texas.

Plans for accommodating migrant children at military bases first came to light in May. Emails seen by US media revealed the bases would house minors who have crossed into the US without an adult relative as well as those who have been separated from their parents at the border.

President Trump says he has directed agencies to begin reuniting children and parents separated after entering the US illegally.

At least 2,300 children have been taken from their parents since 5 May after entering the country without documentation at the US-Mexico border.

While the adults are held in custody pending court appearances, the children are being sent to holding cells, converted warehouses and desert tents under the “zero tolerance” policy introduced in April.

Officials have also gone to court to try to lengthen the time children can be held as parents are prosecuted.

A vote on a Republican bill on immigration has been postponed until at least Friday as it does not have enough support in the House of Representatives.

Mr Trump had said that only Congress could resolve the issue of separated families but on Wednesday he signed an executive order to keep children with their families but in detention.

What does Trump’s executive order say?

The president’s executive order says adults who illegally enter the US with children still face prosecution. It also calls for:

What about the court case?

A ruling known as the Flores Settlement dating from 1997 places a limit of 20 days on the detention of migrant children – with their families or alone.

The Justice Department is now going to court in California to seek a modification to that limit, as the president’s executive order requests.

But analysts say it is unlikely the limit on detaining minors can be overturned within the next 20 days.

‘I never heard from my son’

Guatemalan undocumented immigrant Beata Mejia Mejia is suing the US government for allegedly violating her human rights when they took away her son, Darwin, after she crossed the US border.

After nearly two weeks in detention in Arizona she says she asked for her son and was given a phone number.

“I rang and rang and they never answered,” she says, “I never heard from my son.”

She told the BBC she was finally allowed to speak to him by phone after being freed on bail paid for by her lawyers on 15 June once her asylum bid was allowed to go ahead.

“I sensed he was very sad,” she says. “Like all mothers, I know my children, and I felt he’s not well.”