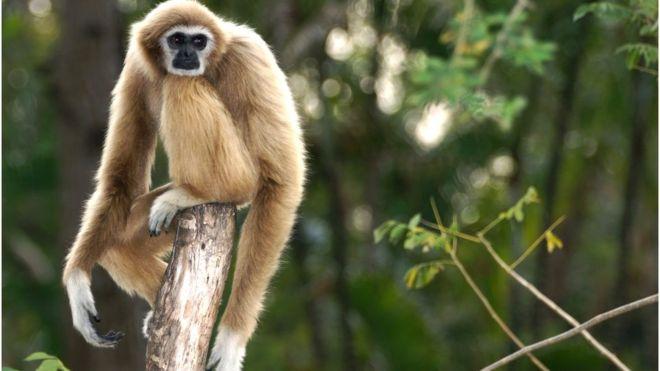 An ape that is new to science has been discovered buried in an ancient tomb in China.

Living primates are in peril, with many on the brink of extinction.

The new gibbon, named Junzi imperialis, may be the first to vanish as a direct result of human actions, according to scientists led by the Zoological Society of London.

“All of the world’s apes – chimpanzees, gorillas, orang-utans and gibbons – are threatened with extinction today due to human activities, but no ape species were thought to have become extinct as a result of hunting or habitat loss,” said lead researcher Dr Samuel Turvey.

“However, the discovery of the recently extinct Junzi changes this, and highlights the vulnerability of gibbons in particular.”

The partial skull of the gibbon was found in a burial chamber dating from about 2,300 years ago in Shaanxi Provence, central China, alongside the bones of other animals, including lynx, leopards and a black bear.

The tomb, and perhaps the ape, may have belonged to Lady Xia, the grandmother of China’s first emperor, Qin Shihuang, who ordered the building of the Great Wall of China and the Terracotta Warriors.

Gibbons were seen as having noble characteristics in Chinese culture and were kept as luxury pets.

High-tech computer modelling shows the ape is a new species and genus of gibbon, which probably survived until a few hundred years ago.

It is almost certain that the gibbon’s demise is evidence of intense human pressures on the environment during this period of history, said co-researcher Prof Helen Chatterjee of University College London.

“Our historical data shows that these factors caused a southward shift of gibbons towards their present day distribution which is restricted to the very far south of China – and in the case of Junzi, its eventual extinction,” she said.

Gibbons, which are the smallest apes, are found in the tropical rainforests of Asia. They are known for their haunting songs and their ability to swing through the tree tops on long arms.

Most species of gibbon are under threat from the destruction of forests, hunting and illegal trade. Two species of gibbon have recently disappeared in China and all surviving Chinese species are classified as Critically Endangered by the International Union for the Conservation of Nature.

One Chinese gibbon, the Hainan gibbon, is now probably the world’s rarest mammal with only 26 individuals left.

The study is published in the journal, Science.