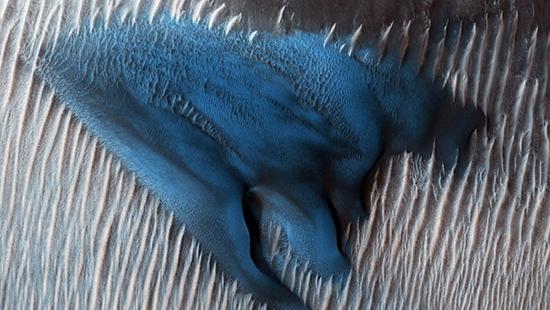 Mars may be known as the Red Planet, but it’s a “blue dune” image NASA has released that’s got everyone talking.

NASA unveiled an image of sand dune on Mar’s Lyot Crater region that has been enhanced to get a better look at the surface features of the fourth planet from the Sun.

NASA added that this particular dune “is made of finer material and/or has a different composition than the surrounding.”

Images from Mars continue to capture the attention of the public, especially as the planet is currently experiencing a massive dust storm that is threatening NASA’s Martian operations.

Earlier this week a composite selfie image taken from NASA’s Curiosity rover was created by scientist Seán Doran, during the aforementioned dust storm, something NASA has called “unprecedented.”

The dust storm has wreaked havoc on Mars, though the Curiosity rover has not been affected, as it relies on plutonium and not sunlight as a fuel source. However, the Opportunity rover, which has been on Mars for nearly 15 years, has not been so lucky, effectively going into sleep mode during the storm.