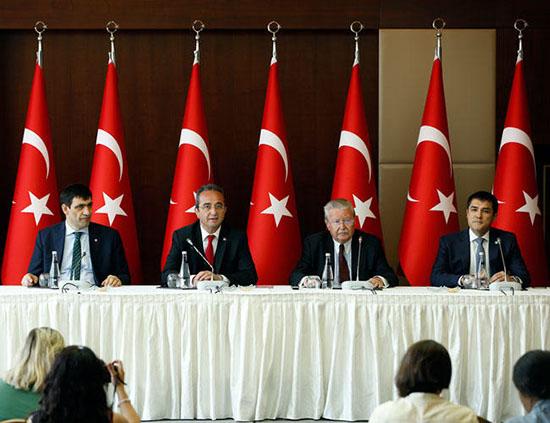 The opposition alliance running for Turkish parliamentary elections has vowed to ensure the separation of powers in the event of a victory by amending the presidential system stipulated by a referendum on constitutional changes last year, in a memorandum revealed on June 21.

“With the parliamentary majority and the president-elect from our candidates, we will reinstate our country’s political system, which has been under the control of one man’s authority, in accordance to the principles of separation of powers and pluralist democracy on a competitive democratic political ground,” read the memorandum revealed by the deputy leaders of the four parties.

The memorandum did not include the term “parliamentary democracy,” as Ağdağ told reporters that while İYİ Party and the CHP defended the “return to the parliamentary system,” the SP and DP supported the executive presidential system, which was narrowly approved by Turkish voters in the April 2017 referendum.

“In this reinstatement process, we will ensure the president uses his/her authority under the principle of the separation of powers and parliamentary supervision,” the memorandum read.

The alliance promised to stick to the “rule of law and the independence and impartiality of the judiciary.”

They also vowed to lift the state of emergency, ongoing since a coup attempt in July 2016, if they win a majority in parliament.

“We are determined to struggle against all kinds of terror relentlessly,” the memorandum read.

“We will take inflation, exchange and interest rates, which have gone out of control, under control by reassuring there is a safe environment and that we are normalizing. We will ensure all our citizens and institutions enjoy all rights and freedoms, particularly freedom of expression and the press,” it added.

Meanwhile, CHP presidential candidate Muharrem İnce said if the “Nation Alliance” secures the majority and he is elected to the presidential post, the future cabinet and vice presidents would include representatives of “all people.”

“We will arrange the [configuration of] ministers in the cabinet and vice presidents in a manner that they will embrace all segments of society. And we will start restoration immediately,” İnce said in a televised interview on private broadcaster FOX TV on June 21.

He pledged the first move would be to “normalize” Turkey by making reforms in the judiciary and economy.

As the new executive system grants the president the authority to form the cabinet and assign vice presidents, İnce said his cabinet “would not only be formed by CHP members.”

“There will be representatives from all parties,” he said, adding that it would include the ruling Justice and Development Party (AKP) and Nationalist Movement Party (MHP).

He also said he would grant İYİ Party leader Meral Akşener and SP leader Temel Karamollaoğlu vice presidential posts if they would request such a position.