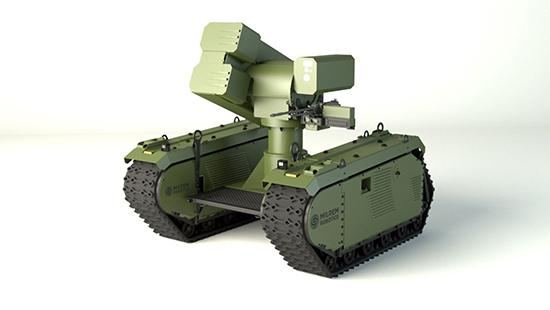 A new robot will be able to stealthily approach an enemy tank – and destroy it.

This is no ordinary robot – it is missile toting one. A smart robot that can conduct missions to destroy enemy tanks entirely by itself.

Milrem Robotics has teamed up with missile specialist MBDA. Together, they are building a smart robot, armed with powerful missiles, designed to obliterate enemy tanks.

If successful, this revolutionary robot would mean the U.S. military could send in robots to stop a wave of enemy tanks rather than putting U.S. troops at risk.

While this is Terminator-level stuff, the robot will not look humanoid. The tank slayer robot will travel on tracks like tanks. In fact, it will look similar to ground robots currently used for defusing mines and reconnaissance; however, this robot is extremely lethal to tanks.

The tank killer will be armed with MBDA’s highly-destructive fifth-generation MMP anti-tank missiles.

If deployed, battlefields could see scenarios of unusual, futuristic duels: tank versus robot.

These robots could also act as sentries, placed in positions in advance set in surveillance mode, and ready to swing into action when enemy tanks begin rolling towards them. Without an RF or heat signature, it would be very difficult for enemy forces to flag them.

The tank-slaying robots could also potentially act as a team moving through a battlefield and sweeping for tanks. Deployed in advance of ground troops, these robots could potentially remove the threat of main battle tanks.

Revealed last week at the Eurosatory event in Paris, weaponized THeMIS certainly drew a whole lot of buzz at high levels with the U.S. military and many allied militaries walking the floors, window shopping for cutting-edge land warfare advances.

Diesel-electric, THeMIS can reach speeds of approximately 14 mph. It can conduct missions for about 10 hours without needing to refuel.

It has a silent mode, which is useful for sneaking up on enemy forces. In silent mode, the robot can operate on missions for about one and a half hours without needing a power boost.

A strong little fella, it can carry up to about 1,650 pounds.

From a significant distance away, the military team could pilot the robot using the cameras onboard to “see” what the robot “sees.”

Alternatively, forces could equip the robot for autonomy and then deploy the robot to complete missions as ordered, entirely by itself.

Both these methods of deployment provide the very crucial advantage of keeping ground troops at a distance from enemy tanks – and hopefully very safely beyond their reach.

Sneaking up on Enemy Tanks

The tank-slaying robot’s design is taking into consideration the issue of heat signatures in the battlespace. An adversary equipped with tanks will most likely have sophisticated methods to seek out forces. For example, an enemy with thermal imagers could locate U.S. forces who are concealed to the naked eye by detecting their heat signatures.

If the robot’s heat signature is low enough, then it could potentially sneak up on enemy tanks with crew relying on tech like thermal imagers to “see” outside the tank.

The THeMIS robot would be enhanced with a turret ordinarily mounted on light armored vehicles.

The 550-pounder, motorized IMPACT has day and night sensors integrated for firing the missiles. It also carries two missiles ready to fire instantaneously.

What if en route to the target, the little robot falls under attack by enemy soldiers?  The robot can be equipped to protect itself and the mission.

For the robot to defend itself against threats smaller than a tank, this turret also provides a 7.62 mm machine gun. The IMPACT turret carries the machine gun ammunition as well.

Just like when the turret is mounted on vehicles and the crew can fire remotely while safely inside the vehicle armor, the robot can be commanded to fire missiles and its machine gun remotely. Teams could be safely behind cover and remotely fire from the robot.

Able to destroy tanks from more than two miles away, the robot will fire tank-destroying missiles called MMPs.

Not only can these missiles destroy tanks, they can destroy heavy tanks with reactive armor firing these MMPs. Reactive armor is an advancement that allows the armor to react to mitigate the impact of a weapon.

The robot could also destroy enemy installations, whether a base or a building where enemy forces have taken cover.

There are two firing mode options: ‘lock on before launch’ and ‘lock on after launch.’

The MMP is a “fire-and-forget” missile. This means that the missile is “smart” and can seek out its target on its own – locking on after launch.

To aid in precisely locating and confirming targets, the MMP has a dual seeker. The missile can “see” in both visible color and in uncooled infrared.

With the robot deployed, the human team can still stay involved in missile firing and control with the fiber-optic data link. MMP is designed for maximum precision and minimum collateral damage.

PODCAST: INSIDE A 7 DAY BATTLE WITH THIS BRAVE GREEN BERET

These robots could provide a key advantage to enhance force protection. By sending robots in to engage and destroy enemy tanks, human troops can be positioned at distances beyond enemy counter fire.

Teams could also deploy the robots at closer range to protect soldiers. For example in urban combat, a team could take cover inside an abandoned building in a region where enemy tanks are patrolling. By deploying the tank-killing robot, the team could remain safely behind cover and still eliminate the tank threat.

Similar to recon robots, the THeMIS equipped with IMPACT will also be able to provide potentially crucial data. Sent in advance of the human team to handle tanks, the robot can feed data back to the human team on intel like enemy positions, force strength, terrain and more. So while on its way to stop a tank and its way back, the little robot could also perform intelligence, surveillance and reconnaissance duties.

Allison Barrie is a defense specialist with experience in more than 70 countries who consults at the highest levels of defense and national security, a lawyer with four postgraduate degrees, and author of the definitive guide, Future Weapons: Access Granted, on sale in 30 countries.  Barrie hosts the new hit podcast “Tactical Talk”  where she gives listeners direct access to the most fascinating Special Operations warriors each week and to find out more about the FOX Firepower host and columnist you can click here or follow her on Twitter @allison_barrie and Instagram @allisonbarriehq.