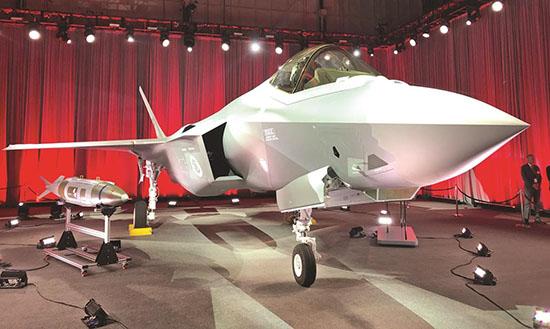 Turkey has vowed to continue its contribution to global peace and security as a credible NATO ally on the day it officially received its first F-35A stealth fighter from the contractor Lockheed Martin in a symbolic but milestone ceremony at the aerospace’s company headquarters in Fort Worth, Texas on June 21.

“Turkey has allocated a significant amount of financial sources to this partnership and has provided an enormous contribution to the program from the very beginning. Plus, the joining of the Turkish industry has an important impact on the cost effectiveness of this program,” said Defense Industries Deputy Undersecretariat Serdar Demirel at the rollout ceremony for the first F-35A.

“As Turkey continues to serve global and peace and security as a reliable and committed NATO ally, the deployment of F-35s will help the protection of our security and territorial integrity of our country for future generations,” Demirel said.

“All the Turkish Air Force shares the same excitement I have today,” said Major General Reha Ufuk Er at the ceremony on behalf of the Turkish General Staff. “Turkey will provide better interoperability for the NATO operations with F-35s,” he said, adding that the procurement of the warplanes will open a new chapter for the Turkish Air Forces.

The first two F-35s will soon be transferred to Luke Air Force Base in Arizona where Turkish instructor pilots and maintainers will undertake a lengthy training program. Turkey’s plan is to procure 100 F-35s in the next few decades.

Lockheed Martin CEO and President Marillyn Hewson expressed her honor in delivering the first f-35A to the Republic of Turkey. She said she was certain the F-35s would play a crucial role in enhancing global security, as this new generation sophisticated warplane will have a transformative role with its high technology and capabilities.

A number of Turkish companies have been producing some key parts of the F-35s in line with the memorandum of understanding the SSM signed with the Lockheed Martin in 2007.

“Turkey is a valuable partner and we really enjoy it. In fact, we have had a decades-old partnership with Turkey dating back to the production of F-16s,” F-35 Business Development and Strategy Integration Vice President Jack Crisler told a group of journalists in a briefing at the Lockheed Martin headquarters, a day before the ceremony.

Crisler recalled Turkey joined the F-35 program in 2002 and its defense industry procurer, the Undersecreteriat for Defense Industries, signed a Memorandum of Understanding with Lockheed Martin for becoming a part of the production chain through manufacturing certain parts of F-35s by Turkish companies.

“The Turkish industry is doing great job in producing quality parts and delivering them on time,” the vice president said.

“We proudly announce Turkey’s participation [in the production of F-35s],” he said.

Turkey is planning to procure around 100 F-35s. Thirty of them have already been contracted. With Lockheed Martin planning to ramp up to full rate production for the next ones, it is believed that Turkey will be able to deploy its new squadron by the end of next decade. The production process of an F-35 fighter is around 36 months.

Turkey’s first F-35 will be deployed to Turkey in the third quarter of 2019 and it will be operational by the fourth quarter of 2020, according to the Lockheed Martin official. In between, Turkey’s instructor pilots will be trained at the Luke Air Force Base in Arizona for more than a year before returning to Turkey to train other Turkish pilots.

Crisler informed that more than 300 aircrafts have already been delivered to different air forces in the world and 620 pilots and more than 5,000 maintainers have been trained in the United States.

F-35s in eyes of fighter pilot

For those who have no information and interest on developments in the field of warfighters, F-35s are just another member of U.S.-manufactured F series fighters like F-4s, F-104, F-16s or F-22s, and Raptors.

But for those who fly all these cited warfighters, the F-35s clearly display a new phenomenon. Billie Flynn, a former fighter pilot for the Royal Canadian Air Force and now an F-35 test pilot at the Lockheed Martin, explained the difference.

“There are two main characteristics of F-35s: Stealth and sensor fusion,” the experienced pilot said during a briefing with Turkish journalists.

The only thing top officials of the Lockheed Martin do not want to talk is the ongoing political debates between the Turkish and American governments and the ongoing processes at the U.S. Senate for blocking the delivery of F-35s to Turkey.