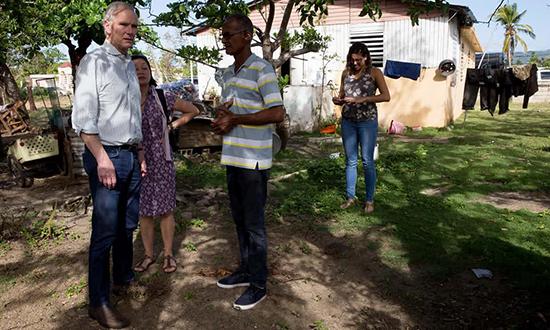 The Trump administration has been castigated at the United Nations in Geneva for consciously exacerbating levels of inequality in America that are already the most extreme in the western world.

The excoriating report on the state of the US nation was delivered to a packed hearing of the human rights council on Friday by the UN’s monitor on extreme poverty, Philip Alston. In what is now turning into a battle of words between the US government and international observers, Alston hit back at criticisms that had been leveled at him the previous day by Nikki Haley, US ambassador to the UN.

Haley complained that it was “patently ridiculous for the United Nations to examine poverty in America”. She accused the UN special rapporteur on extreme poverty and human rights of political bias and wasting UN money by carrying out a six-month investigation into poverty and inequality in America, saying he should have focused instead on countries like Burundi and the Democratic Republic of Congo.

Addressing delegations from 46 countries gathered in the chamber of the human rights council, Alston fired back that “when one of the world’s wealthiest countries does very little about the fact that 40 million of its citizens live in poverty, it is entirely appropriate for the reasons to be scrutinized”. He said that the “massive tax cuts” promoted by Trump would “overwhelmingly benefit the wealthy” while other policies pursued by the US government would stigmatize and punish millions of low-income Americans.

In his most caustic comment, Alston threw back at Haley a term that she herself had used to deride the UN human rights council as a “cesspool of political bias”. Alston said that same council that he had seen with his own eyes real cesspools ­– in Alabama, during his tour of poverty hotspots in America.

“I witnessed raw sewage poured into the gardens of people who could never afford to pay $30,000 for their own septic systems.” He added poignantly: “Cesspools need to be cleaned up, and governments need to act.”

Such criticism of the world’s most powerful nation was all the more striking given the absence in the room. That morning, the chair normally occupied by the US delegation to the human rights council in Geneva was removed from the chamber following the decision of the Trump administration on Tuesday to withdraw from membership.

The departure of the US makes it the only country to have pulled out of the world entity since the council was founded in 2006.

Haley said the decision to depart was motivated by anger over the council’s perceived anti-Israeli bias, and about the continued membership within the body of human rights abusers such as Venezuela and the Democratic Republic of Congo. But there was also growing speculation over whether the timing of the withdrawal had anything to do with Alston’s deeply critical report on poverty in America.

Ken Roth, executive director of Human Rights Watch, asked in a tweet: “Is it just a coincidence that the US withdraws from the UN Human Rights Council two days before it examines the Trump administration’s neglect of poverty in the United States?”

Had the US delegation been present in the council for the hearing, they might have been forgiven for wincing at Alston’s presentation. He accused Haley of wanting to exempt the US from precisely the kind of international accountability over human rights that the Trump administration demanded for other countries.

Turning to the findings of his tour of the US, he noted that maternal mortality rates among African Americans were now almost double those in Thailand. He cited new World Health Organisation data that shows that babies born in China today will live longer healthy lives than babies born in America.

While accepting that the US economy was enjoying a period of growth, Alston said: “But the question is, who is benefiting. The benefits of economic growth are going overwhelmingly to the wealthy.”

Since 1980, he said, the average national income before tax for the bottom half of US income distribution had stagnated at just $16,000, while earnings of the top 1% had soared. “In other words, the American dream of mobility is turning into the American illusion, in which the rich get ever richer and the middle classes don’t move.”

Most ominously, the UN monitor warned that the persistence of extreme poverty in the US would have a knock-on on the health of its democracy. He said such enduring problems “create ideal conditions for small elites to trample on the human rights of minorities, and sometimes even of majorities”.

The warning was echoed by the ACLU, which told the human rights council that under Trump the US was suffering “the erosion of political participation. People living in poverty in the United States are being systematically deprived of their right to vote.”